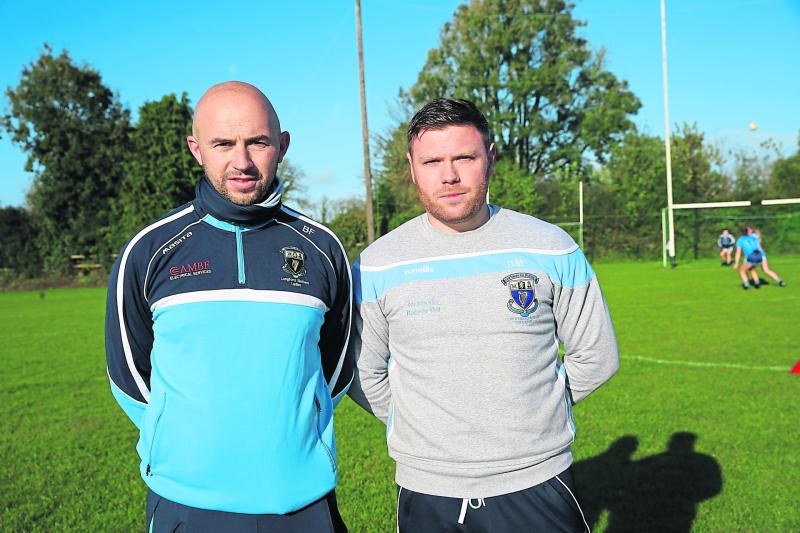 Longford Slashers ladies are one step away from achieving a three-in-a-row of Longford senior titles following a second half demolition of Mostrim in Emmet Park, Killoe on Sunday last.

However, the Slashers girls upped their game considerably in the second period and Mostrim had no answer. Mostrim failed to score in the second half as Slashers fired in four goals.

While they will be concerned with aspects of their first half display, their second half performance sets them up very well for the final, where they meet Carrickedmond, in a repeat of last year’s decider.

While five different players helped themselves to goals, it was the outstanding No. 11 Grace Shannon who led the way. She scored five points from play and she is a player of exceptional talent, allied with physical power.

Mostrim will be wondering how a decent first half display, albeit low scoring, gave way to a second half hammering.

In fairness, they battled to the very end, with full-back Leanne Keegan and midfielder Mairead Victory performing well overall.

But they found scoring very difficult and a lot of their attacks broke down in the middle third, with Slashers mopping up ball, none more so than centre-half-back Eimear O’Brien.

A good build up led to Mostrim’s opening score, a Louise Monaghan point in the 6th minute.

A long ball from Mairead Victory in the 10th minute led to a Briana Connell goal for Mostrim, who finished well.

Slashers recorded three successive wides before Clare Farrell fisted the ball over the bar, following an excellent run down the right flank. Another point followed from Grace Shannon.

Slashers were denied a goal midway through the first half when Kate Shannon’s shot was smartly saved by Mostrim keeper Paula Cullen.

The Slashers midfield were getting on top and they were working well with Grace Shannon, who scored an excellent point in the 20th minute.

Centre-half-back Rebecca O’Hara was also getting through an amount of work for Mostrim.

However, Slashers finally got through the Mostrim rearguard in the 24th minute. Jessica Barry’s shot was initially saved by Paula Cullen, but the ball spilled back out and was deftly finished to the net by Aisling Cosgrove.

Jessica Barry followed with a point to give her side a four-point lead but Mostrim came right back into it when Louise Monaghan stormed through the Slashers defence and fired a bullet past opposing keeper Eimear Casey for a great goal.

Half-time and Mostrim could be reasonably happy with their efforts. However, Slashers started the second period with intent.

A Grace Shannon point was followed by a Lisa Nolan goal. Points from Jessica Barry (free), Kate Shannon and Grace Shannon followed. Going into the water break, Slashers were 2-9 to 2-1 up and Mostrim were desperately hanging on.

Where they had been sluggish early in the first half, Slashers were ruthless in that third quarter.

Despite some heroic defending from Leanne Keegan, Mostrim were under siege. The floodgates opened.

A Clare Farrell point was followed by goals in quick succession from Jessica Barry, Kara Shannon and Kate Shannon. 5-10 to 2-1 with five minutes left and you just wanted it to end, for Mostrim’s sake.

Mairead Victory was one of the few Mostrim players to take the fight to Slashers as the ship went down, as she chipped at Slashers midfield dominance. However, her forward colleagues were just not functioning, and the opposing defence was watertight.

Mostrim ended up getting a very harsh lesson in the realities of senior football, but their first half display should be cited as a building block for them.

Slashers will be favourites now to retain the Alison Smyth Cup but they must be aware of the perils of easily winning a semi-final. No trophies were given out last Sunday.

Subs:- Jill Glennon for A Barry, Emma Reilly for G Reilly (both water break, second half).