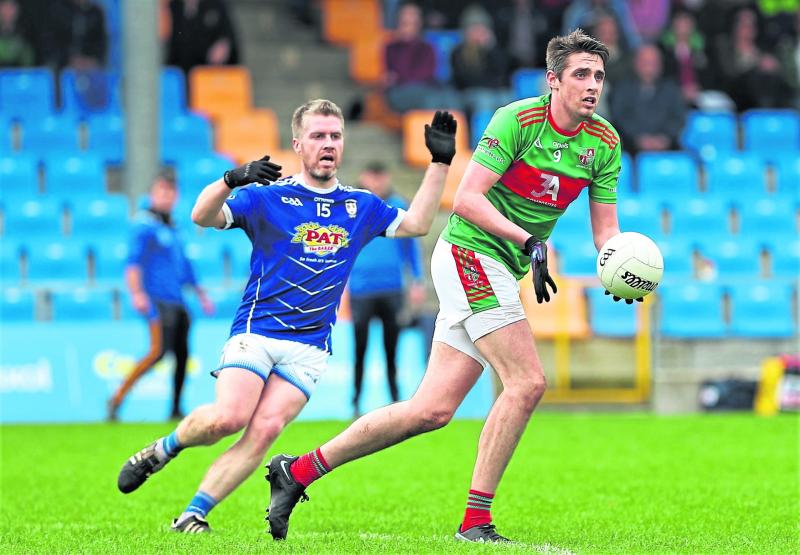 Fergal Sheridan on the ball for Colmcille ahead of Granard opponent Derek Sheridan. Action from the SFC quarter-final on Sunday Photo: Syl Healy

There are now just four clubs left in contention for the Connolly Cup with the 2021 Senior Football Championship coming to a very exciting conclusion.

The intriguing semi-finals are down for decision this Sunday and who knows what might happen in the quest to qualify for the title decider on November 7.

With the exception of the easy win for Mullinalaghta over a Carrickedmond side who collapsed on the big stage at Glennon Brothers Pearse Park, things were very tight in the other three quarter-finals last weekend.

The most dramatic match was unquestionably the meeting of Mostrim and Dromard with a last gasp goal from substitute Seamus Hannon deep into stoppage time snatching a win for the Edgeworthstown side.

One of their own, Ray Hussey, is doing a fine job in the manager role and it must be said that Mostrim have been knocking at the door in the recent past in their fierce desire to reach the senior final for the first time since 1992 when the club were last crowned the county champions.

Standing in their way are Colmcille who can be inconsistent but are capable of competing with the best.

Their boss Eugene McCormack will not have been pleased with the manner in which they let a commanding lead slip against Granard and were almost caught with just a solitary point separating the sides in a tense finish.

Colmcille’s last appearance in the county SFC final was back in 2008 when they captured the Connolly Cup and they will be quietly confident of going all the way this year.

Having said that, the general opinion is that Mullinalaghta will be hard beaten but their manager Ciaran Fox will undoubtedly be wary of the stern challenge his charges are facing against a Killoe side chasing a three-in-a-row.

Emmet Og and St Columba’s have dominated the Longford championship in recent years, winning the last seven titles between them (2014 to 2020), and whoever emerges victorious in the second semi-final on Sunday will quite rightly be installed as the favourites to win the title.

Killoe have been hit by a number of injuries, with sharpshooter Mark Hughes their most notable absentee, but the manager Tommy Donohoe is working with a strong squad.

The reigning champions showed a lot of character in coming from five points down to eventually get the better of  the Robbie Smyth inspired Abbeylara in the quarter-final and Killoe’s fine blend of youth and experience will be a tough nut to crack.

A close encounter is probably in prospect but Mullinalaghta, backboned by a lot of quality players, are fancied to come out on top and a county final clash against neighbouring rivals Colmcille looks the likely outcome.