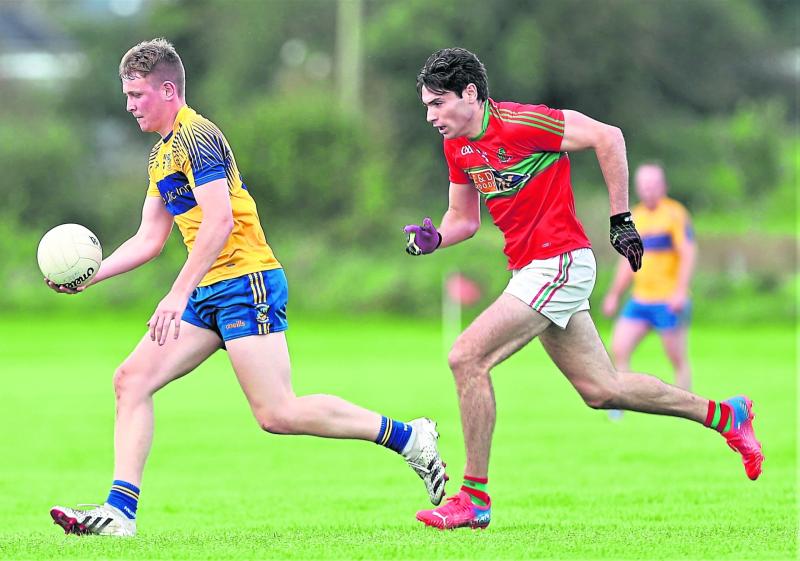 Sean Kelly on the attack for Carrickedmond with Mostrim midfielder Brian Farrell in pursuit. Action from the recent SFC Group A game Photo: Syl Healy

Mostrim continued on their impressive unbeaten run in the 2021 Senior Football Championship when they beat Killoe to finish top of Group A after leading by 1-7 to 0-7 at half-time.

With both teams already qualified for the quarter-finals, there was little at stake in the remaining group stage fixture at the Monaduff grounds last night (Tuesday) which was postponed on Friday due to the death of Molly Hussey, mother of the Mostrim manager Ray and squad member Michael.

Having said that, the result changed the course of the draw (1 v 4 and 2 v 3) for the last eight and opened up a great opportunity for a different team to appear in the county final for the first time in a few years.

Mostrim now meet Dromard with Colmcille facing the challenge of Granard and one of those clubs will end up in this year’s senior football championship final.

In the other half of the draw the reigning champions Killoe, chasing a three-in-a-row, will take on Abbeylara while the Group B table toppers Mullinalaghta confront Carrickedmond who sprang a surprise to knock Slashers out of the Connolly Cup.

Emmet Og and St Columba’s have dominated the Longford championship in the recent past, winning the last seven titles between them (2014 to 2020). Will the great rivals end up clashing in this year’s semi-final?