Longford Senior Football Championship now down to the serious stuff

Killoe, Colmcille, Mostrim, Mullinalaghta, Abbeylara and Granard through to the quarter-finals 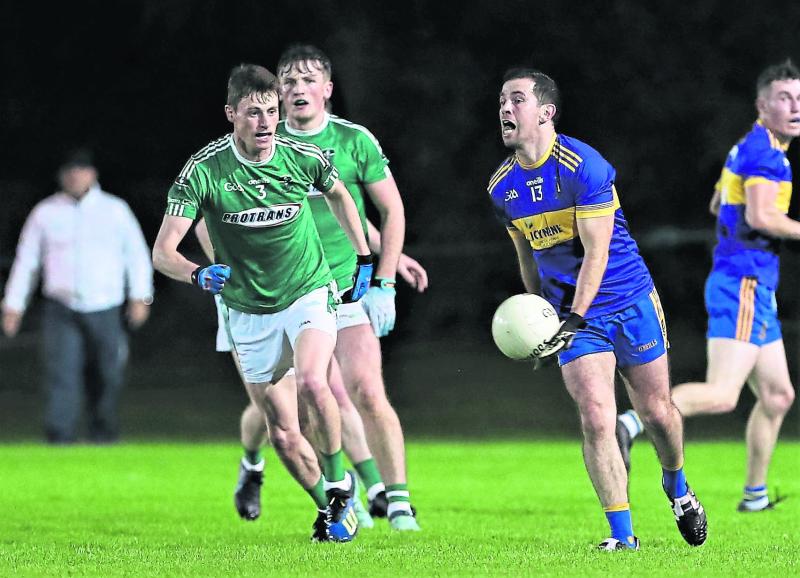 Francis McGee on the ball for Dromard ahead of Clonguish opponents Ronan Sweeney (3) & Packie Molloy. Action from the SFC Round 4 Pic: Syl Healy

Just two places remain to be filled in the quarter-finals of the 2021 Senior Football Championship and it is now down to the serious stuff in the battle for Connolly Cup glory.

With Killoe, Colmcille, Mostrim, Mullinalaghta, Abbeylara and Granard all through to the last eight, there will be little emphasis on their fixtures in the final round of the group stage apart from the 1 v 4 and 2 v 3 regulation to determine the knockout pairings.

The focus is firmly on the couple of matches that really matter this weekend and it is right down to the wire for the 2019 and 2020 beaten finalists Longford Slashers who face Carrickedmond at Glennon Brothers Pearse Park on Sunday, throw-in 4.30pm.

Carrick manager Stephen Coy will have his players fired up in their bid to spring a surprise and while Slashers will be wary, the expectation is that Noel O’Brien’s side should survive to keep alive their hopes of reaching the county title decider for the third season in a row.

Looking doomed for a relegation scrap after losing their first three games, Dromard called on all their vast experience to deal Clonguish a shattering blow in the crunch Group B clash last weekend.

While Padraig Brady’s charges will carry a fair amount of momentum from that win into the make or break showdown against Rathcline at Glennon Brothers Pearse Park on Saturday (throw-in 4.30pm), a tight contest is probably in prospect to determine who will qualify for the quarter-finals.

The father and son management team of Tommy and Joe McCormack have blended the Lanesboro lads into a decent outfit and they will be quietly confident of progressing further in the championship.

Ardagh Moydow, Ballymahon and St Brigid’s Killashee have all reached the last four in the Intermediate Championship and will be joined by Kenagh or Sean Connolly’s who clash at Glennon Brothers Pearse Park on Sunday, throw-in 2pm.