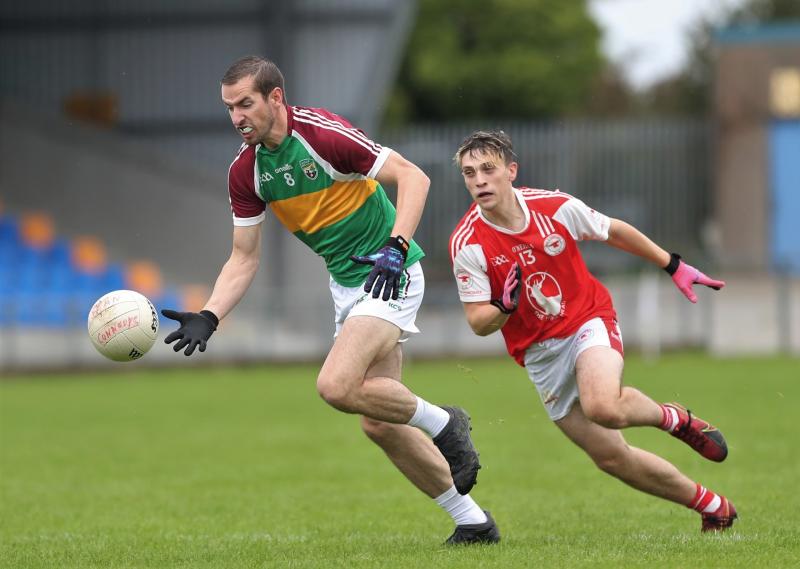 Paddy Keenan on the ball for Ardagh Moydow ahead of Connolly's opponent Ronan McGreal. Action from the IFC game Photo: Syl Healy

A point from a free converted by Daniel Reynolds in the fifth minute of stoppage time saw Sean Connolly’s snatch a draw against Ardagh Moydow in the Intermediate Football Championship Group B game at Glennon Brothers Pearse Park on Sunday.

Underfoot conditions were difficult but credit to both teams for producing an entertaining encounter. Ardagh Moydow keeper Brian Farrell pulled off a number of saves late on to deny Connolly’s a second goal.

Ardagh Moydow were forced into making three first half changes all due to injuries. They were poor in the first quarter but after the water break upped their performance and led by 2-4 to 0-4 at half-time.

The 2020 beaten finalists were dealt a blow in the early stages of the second half when a harsh penalty was awarded against them and Daniel Reynolds converted the kick for the Connolly’s goal. Reynolds was excellent throughout and a real threat for the Ballinalee side.

This result puts Ardagh Moydow through to the semi-finals with Connolly’s and Kenagh battling it out for the remaining place in the last four of the Hennessy Cup when they meet at Glennon Brothers Pearse Park on Sunday next.