Longford SFC: Killoe hold out for slender win over Slashers 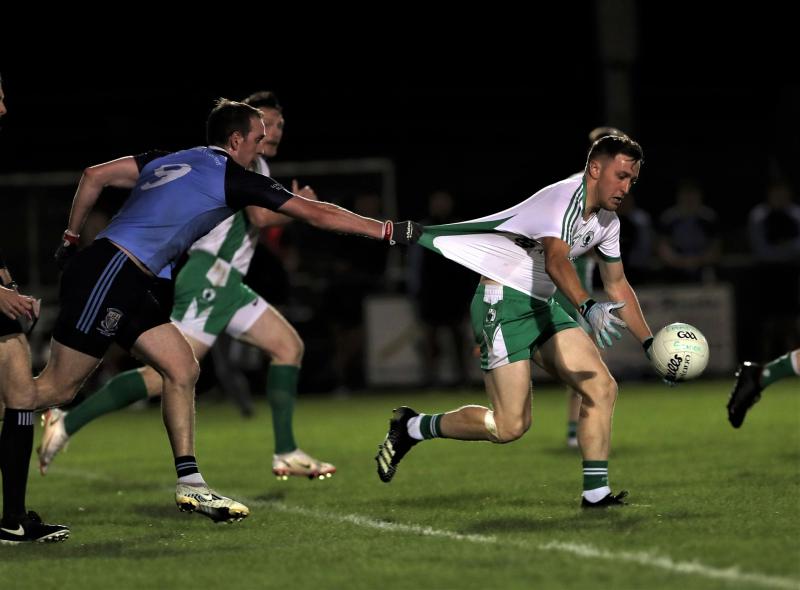 Daniel Mimnagh on the ball for Killoe in the tight grip of Slashers opponent Andrew Dalton. Action from the SFC Round 2 Photo: Syl Healy

While Slashers deserved better in their latest slender defeat against Killoe, it was the same old story as several scoring chances were squandered by Noel O’Brien’s side.

Having said that, Robbie Clarke was most unlucky not to get a goal when he shot against the crossbar in the early stages of the Senior Football Championship Group A second round clash at Pairc Chiaran, Newtowncashel on Friday night.

That proved to be a crucial factor in the eventual outcome and Killoe appeared to be in control when they held a comfortable 0-8 to 0-2 lead at half-time.

Slashers, to their credit, showed a lot of character in gradually closing the gap on the changeover and almost snatched victory deep into stoppage time.

Ruairi Clarke had his goal attempt very well saved by Killoe keeper Micheal Hughes and while the ball broke into the path of Robbie O'Connell he was unable to make firm contact as his shot was blocked in the eighth additional minute.

Slashers finished the game with 13 players on the pitch with Sean Clarke (black card) and Dermot Brady (red card) dismissed very late in this scrappy game.

Killoe, on the other hand, were reduced to 14 players midway through the second half when Evan Farrelly received a black card.