Longford SFC: Killoe and Slashers renew rivalry in the battle for the 2021 county title 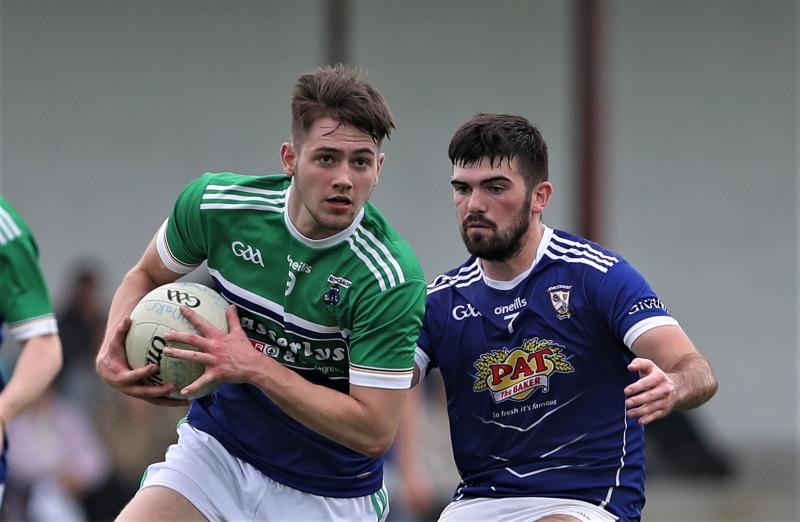 Richard Prior on the ball for Rathcline against Granard opponent Mark Tully. Action from the SFC Group B Round 1 clash Pic: Syl Healy

The big surprise in the opening round of this year’s Senior Football Championship last weekend was the crushing setback suffered by the 2020 beaten finalists Longford Slashers who were no match for a revitalised Mostrim side under the guidance of new manager Ray Hussey.

The remarkable wide margin of 15 points (2-19 to 0-10) separated the sides in the finish at Keenan Park in Ardagh and subdued Slashers are already under pressure in their quest to qualify for the quarter-finals.

The stunned sky-blues have four fixtures remaining in the group stage of the Connolly Cup, starting with a very tough task against the two-in-a-row champions Killoe at Pairc Chiaran in Newtowncashel this Friday night, throw-in 8pm.

While Emmet Og were slow into their stride against Fr Manning Gaels, they gradually asserted their superiority to score an emphatic 3-15 to 0-7 win and will be in a confident frame of mind in renewing rivalry against Slashers in a repeat of the recent 2020 county title decider.

The most exciting match in Round 1 last weekend was unquestionably the high scoring thriller at McGee Park which saw Abbeylara pip Dromard by a point (5-11 to 3-16) and Ryan Plunkett’s charges will be seeking another victory when they take on Rathcline this Sunday.

Dromard, on the other hand, are facing a very difficult game against Mullinalaghta with St Columba’s bouncing back from the disappointment of missing out on the 2020 title to score a comprehensive win over Clonguish.

Granard looked good in getting past Rathcline with eight points to spare in the Round 1 fixture and St Mary’s manager Ryan Casey will be hoping to build on that positive result when they take on Clonguish on Sunday.

The remaining two fixtures in the second round of the senior championship are scheduled for Friday night with a lot of stake in the meeting of Carrickedmond and Fr Manning Gaels at McGann Park in Kenagh after both clubs lost last weekend.

Carrick, with Stephen Coy back in charge, found the going too tough against Colmcille who will be wary as they prepare to meet Mostrim in the Round 2 clash at Allen Park.