Longford GAA: Clonguish triumph in thriller to capture the U-15 county football title 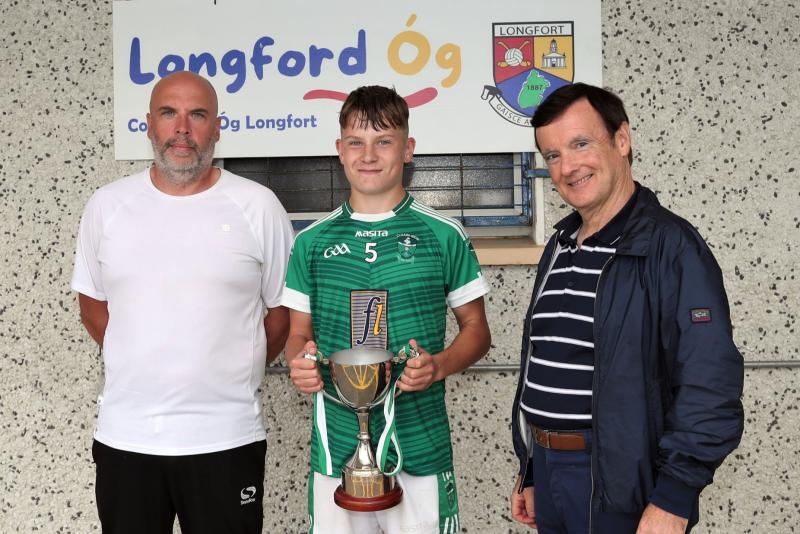 Clonguish Óg captured the Pearse Daly Cup after a terrific battle against their neighbours Killoe Óg in a thrilling U-15 Football Championship Final at Glennon Brothers Pearse Park on Saturday last.

Despite the start of the 2021 senior championship, this frantic clash between two talented outfits proved to be the game of the weekend and all spectators were treated to a feast of pure football. After a tightly contested Juvenile ‘A’ championship it was fitting that the pinnacle of the competition was this epic encounter.

Extra-time was needed to separate the sides and 1-3 from full-forward Cormac Flynn in the additional period proved to be the difference in the end. The deadly attacker was tightly marshalled throughout the normal period but showed his class when the game opened up in extra-time.

Goals were the order of the day and the scoreline could have been even larger had it not been for two excellent individual performances from both goalkeepers Abdullah Munir and James Dooner.

Goals in fact kept Aidan Keogh’s Killoe side in the game when it looked like Clonguish were going to pull away early on, as they did in the 2020 U-14 championship final played a couple of months ago.

Clonguish raced into a 9 point lead with points arriving from all over the park including a brilliant effort from captain and wing back Kevin Baskett who was superb throughout the match.

Michael McDonagh got a goal after his penalty was fantastically saved by Dooner. Killoe found themselves 1-6 to no score behind approaching half-time but in that period they hit the post twice with shots from Jack Fitzpatrick and Davin Donnelly.

They finally found the back of the net with a sweet strike from Paul Eivers. Gerard Keogh added another goal moments later to pull Killoe  back into contention, fighting a fierce battle in which they refused to surrender right until the end.

Centre-half-forwards Jack Fitzpatrick and Daniel Carey traded scores on the stroke of half- time and Clonguish led by the reduced margin of 4 points at the interval, 1-8 to 2-1.

A revitalised Killoe side came out the blocks fast after the restart and fired 1-2 inside a matter of minutes to spring into a one point lead with Gerard Keogh on hand to get his second goal. Daniel Lee was operating efficiently as a sweeper and cutting out numerous Clonguish attacks.

Cormac Flynn got his first score from play in the third quarter with a fine goal but Killoe responded with a goal from Davin Donnelly, maintaining their one point lead at the second water break, 4-5 to 2-10.

Tidy corner-forward James Hagan levelled matters with a great score before Michael McDonagh was fouled for Clonguish’s second penalty. Captain Baskett stepped up to the mark to convert the kick and put Clonguish back into the lead.

Time was running out and it looked like Clonguish had victory sealed but three late points from the Killoe side, a brace from Shane Donohoe and a terrific Fitzpatrick free, sent the game to extra-time with the sides deadlocked: Clonguish 3-11 Killoe 4-8.

There were tired legs on both sides as the game opened up in extra-time with Killoe mostly affected after they battled hard to overcome their 9 point deficit in the first half of normal time. They got an early goal from full-forward Enda Quinn but failed to score for the remainder of the additional period.

Clonguish, on the other hand, kicked on with goals from Cormac Flynn and Peter Toher to clinch consecutive Juvenile championship titles much to the sheer delight of their management team - Kieran Carey, Enda McKeon, Damien Dorr and Terry Flynn.