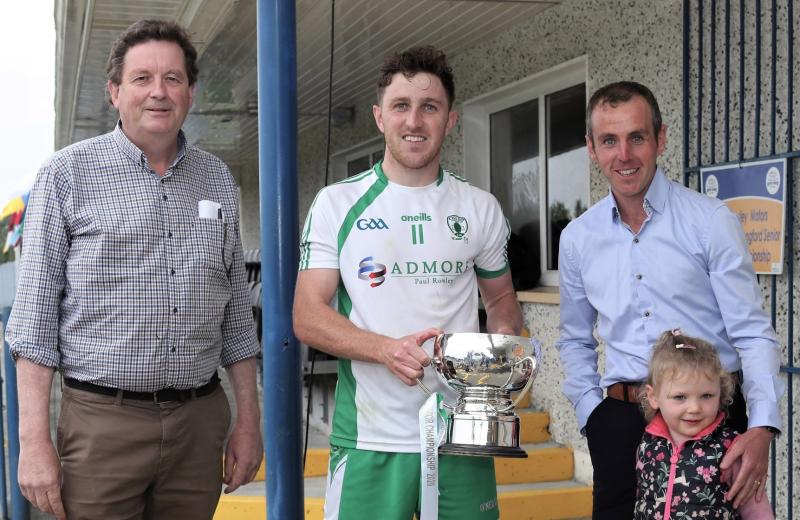 For Killoe captain Daniel Mimnagh, following in his father’s footsteps of lifting the Connolly Cup was something special for him.

Mimnagh was Man of the Match in 2019 when Killoe won the senior championship and on Sunday he had the honour of captaining them to the 2020 title.

He said: “It’s amazing. You never think you can beat the first one in 2012 but to be able to lead lads out, it’s just incredible. They are an incredible bunch; young, don’t have nerves and so confident. Words can’t describe how they are. It’s a community effort as well. Delighted to get over the line.”

In the end two points separated the sides and Mimnagh knew they weren’t going to get anything easy from Slashers. He admitted his side have so much respect for their great rivals who also happen to be their good friends.

“A lot of people said we were raging favourites because we’ve been very good in league games this year. Finals are different and Slashers are a different breed. They are always going to be there. We have huge respect for them. We go off the pitch and some of them are our best friends. We have always had great rivalry and friendship throughout the years.”

Approaching the midway point in the second half Killoe were dealt a blow when Liam Hughes was black carded and Slashers awarded a penalty, which they converted. Mimnagh was pleased with how the players kept calm and didn’t panic.

He said: “People can go into their shells there and adversity strikes. To be fair to these young lads and the experienced lads they kept calm heads.

“We slowed the ball up and kept it moving and we didn’t concede many scores. When ‘Wrecker’ (Hughes) came back in, there was a huge lift from the crowd and it was amazing and it lifted us.”

1,500 were in attendance in Glennon Brothers Pearse Park on Sunday for the final. The Killoe captain was delighted to have supporters back and praised his club’s supporters; “We have great supporters. They follow us, year in, year out. You can see the lift it gives lads.”

Killoe don’t have too much time to celebrate their championship success as they are back out on Saturday evening in the first round of the 2021 championship.

Mimnagh said: “We’ll celebrate tonight but it’s back to work Wednesday. We’ll start our defence of the title against Fr Manning Gaels.”

It was a tough year on and off the field for Killoe. Mimnagh admitted how challenging it was but spoke about how the club stuck together and got their just rewards on Sunday.

“It really was tough. The, not knowing where your future was with the club and even the future with the county as well; we didn’t know what effect it would have on a few of us. Justice prevailed in my opinion; the club stuck at it and deservedly so. Here we are now. It’s just a huge club commitment,” stated the Emmet Og captain.