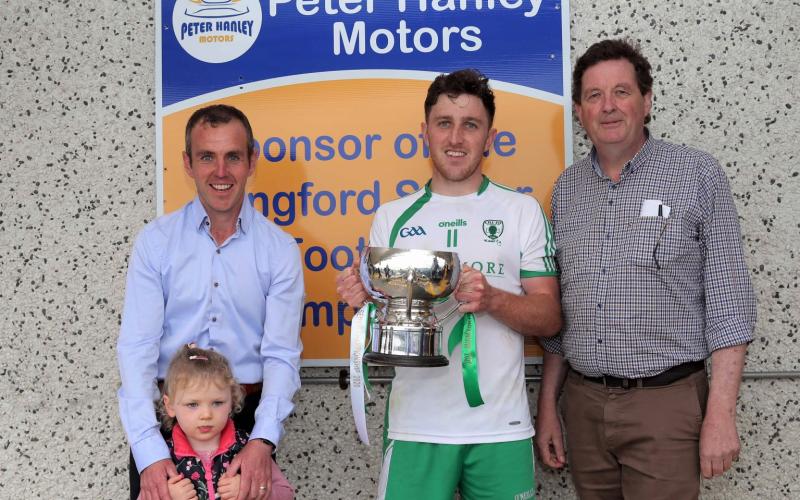 Killoe completed back-to-back triumphs in the Peter Hanley Motors Senior Football Championship when they got the better of Longford Slashers in the Covid delayed 2020 final at Glennon Brothers Pearse Park on Sunday.

Just a couple of points separated the sides in the finish as Emmet Og won the county title for the 13th time and it was their greater scoring power that proved to be a decisive factor as Tommy Donohoe’s charges retained the coveted Connolly Cup.

Slashers also had to settle for second best against Killoe in the 2019 final and the sky-blues were left to rue some poor finishing which accounted for seven costly wides in the second half as they lacked a cutting edge in attack in failing to build on the powerful performances of Daire O'Brien and Tadhg McNevin who won the midfield battle.

Having said that, Emmet Og (who led by 0-8 to 0-5 at the break) failed to convert three goal chances on the changeover and showed a lot of character to overcome the handicap of losing resolute defender Liam Hughes to a black card in the 43rd minute.

Hughes was dismissed for a ten minute period in fouling Darragh O’Connell for a Slashers penalty which was duly dispatched to the corner of the net by Andrew Kelly.

And with the extra man advantage they got back on level terms (1-7 to 0-10) when Barry Gilleran fisted the ball over the bar in the 51st minute.

Killoe came storming back to score a couple of cracking points through Ryan Moffatt and Larry Moran and clinched another senior championship success when Moran fired over a free in the sixth minute of stoppage time.

There was one last chance for Slashers when they were awarded a free but goalkeeper Colm Farrell blasted the ball over the bar in his attempt to snatch a last gasp equalising goal.

It was a deserved victory for Emmet Og with their commanding centre-half-back Michael Quinn winning the man of the match award.