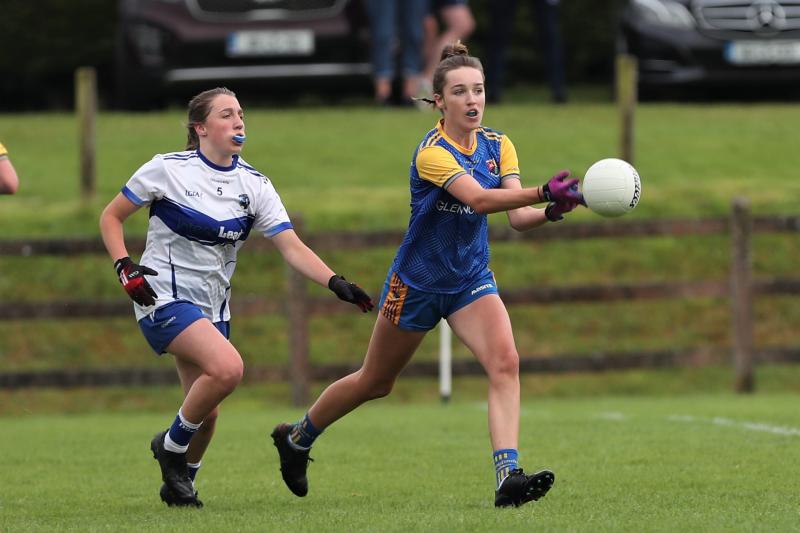 Kate McEntire, captain of the Longford U-16 team, pictured in action against Laois in the Leinster 'B' Final Photo: Syl Healy

A late surge of five unanswered points in the final quarter was not enough for the Longford U-16 ladies as they narrowly missed out on Leinster glory in a two point defeat against Laois in the ‘B’ championship final at Hogan Park, Moate on Wednesday evening last week.

Longford left themselves with too much to do after the second water break, trailing by seven points after a blistering restart from their opponents. Longford did admirably rally with five points while keeping their opponents scoreless but the siege on the Laois defence eluded a goal to complete a courageous comeback.

The game was played in quarters and Longford found themselves chasing the game twice after two thrilling restarts from Laois.

A goal from the throw-in from lively corner-forward Ciara O’Neill marked what was to come for the Longford defence as Laois prioritised goals in their offence.

Longford replied to the first goal with a brace of fine points from Kate Shannon but Laois rained on the opposite goal soon after to score three goals in the space of five minutes. A second goal from O’Neill, another from Holly Hanway and a fine finish to the net from Katie Donohoe put Laois 10 points up inside 12 minutes.

Longford, managed by Pat Tiernan and Sharon Rabbitt, fought back inside the first quarter with two goals.

Two inspiring scores from team captain Kate McEntire kickstarted Longford in the second quarter and further points from Shannon, Megan Glennon and Mia Shannon left the sides on level terms at the break, 2-7 to 4-1.

Laois struck at the heart of the defence once again in a blistering first quarter of the second half as Sarsfields ace Ciara O’Neill completed her hat-trick with a brilliant finish and Holly Hanway added to her tally to raise another green flag.

Longford were now chasing the game again, relying on points from Kate Shannon as she continued to show her class with long range points in the comeback.

Megan Glennon and Ella Duggan added fine scores as well to narrow the gap between the sides.

Longford were fighting an uphill battle in the final quarter despite the best efforts of this talented team.

Eimear McDonagh made a fine introduction with two excellent points in the closing stages but Laois held firm to claim the Leinster U-16 ‘B’ title after a high scoring, riveting final.