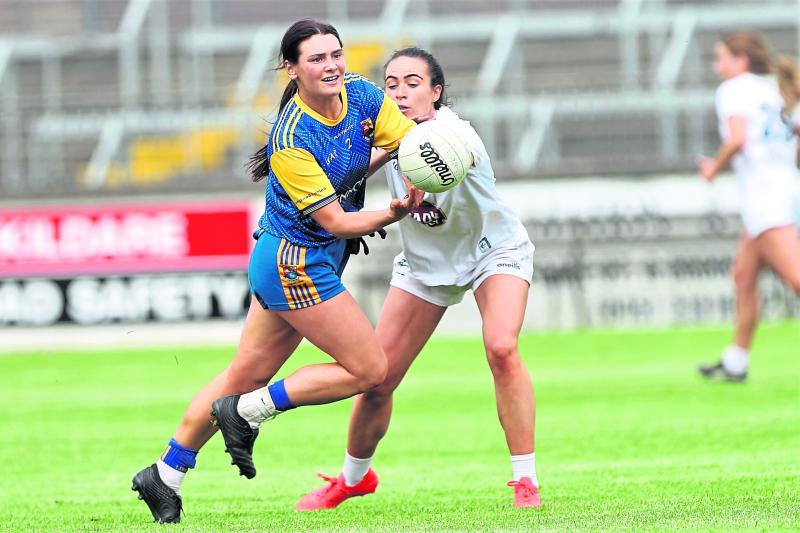 Katie Crawford pictured in action for Longford against Kildare in the recent Lidl National League Division 3B game in Newbridge Photo: Syl Healy

On the evidence of their fine performance in running Kildare so close (0-10 to 0-9) in Division 3B of the National League, the Longford ladies football squad will be approaching the All-Ireland Intermediate Championship in a fairly confident frame of mind with a quarter-final spot the target.

Under the guidance of new manager Brian Noonan, steady progress has been made this season as the Edgeworthstown native works with a good blend of youth and experience in building for the future.

The form going into the championship got a good boost with Kildare going on to score a comprehensive 2-14 to 1-8 win over the previously unbeaten Sligo in the Division 3 league semi-final but Longford are pitted in a tough group in the All-Ireland Series.

First up are last year’s beaten All-Ireland Intermediate finalists Westmeath at TEG Cusack Park in Mullingar this Sunday (throw-in 2pm) and few can argue with the fact that the neighbouring rivals are the favourites to go a step further this year in their fierce desire to capture the coveted Mary Quinn Cup.

The counties also clashed in the group stage of the championship last season with Westmeath cruising to a most emphatic 9-9 to 2-6 victory and while the Longford girls will be very determined to close the gap, this looks like a mission impossible.

Westmeath, after all, have been competing in Division 1 of the National League and after losing to stronger senior sides Galway, Mayo and Donegal in the group fixtures their top flight status was secured with a 2-16 to 2-10 win over Tipperary in the relegation play-off.

The following Sunday (July 18), Longford will take on Wexford at a neutral venue and this looks like a must win game for the midlanders with the top two teams in the group advancing to the championship quarter-finals.

Although operating at a higher level in the league this season, Wexford experienced a torrid time in Division 2 after losing badly against Kerry, Meath and Clare in the group stage (a minus 53 total in the scoring difference) and who then suffered another heavy defeat (11-7 to 0-11) in the relegation play-off against Tyrone.

But the Longford management team will be only too well aware that Wexford will probably be a different proposition in the championship so it is going to take a big performance to achieve a positive result in this game.

Longford’s remaining group fixture is against Sligo at a neutral venue on Sunday July 25 and while the league form suggests a good chance of a win, this is another tough task for Brian Noonan’s charges.

Sligo finished top of Division 3A in the National League with wins over Down, Roscommon and Fermanagh and while they then suffered a disappointing setback against Kildare in the semi-final, the Connacht county will be hoping for an extended run in the championship.

Barring a major surprise, Westmeath should finish top of the group with Longford, Wexford and Sligo battling it out for the other place in the last eight.

The extremely talented Michelle Farrell will captain the county who beat Wicklow by a couple of points (1-7 to 0-8) in the league before losing out to Laois (3-14 to 1-9) and Kildare in the other Division 3B games.

Colmcille’s Farrell will be leading the charge in the attack and with other experienced forwards in Aoife Darcy (Clonguish) and Emer Heaney (Ballymore), Longford will give it their best shot in the championship.