Dramatic finish after the sides ended up deadlocked after extra-time 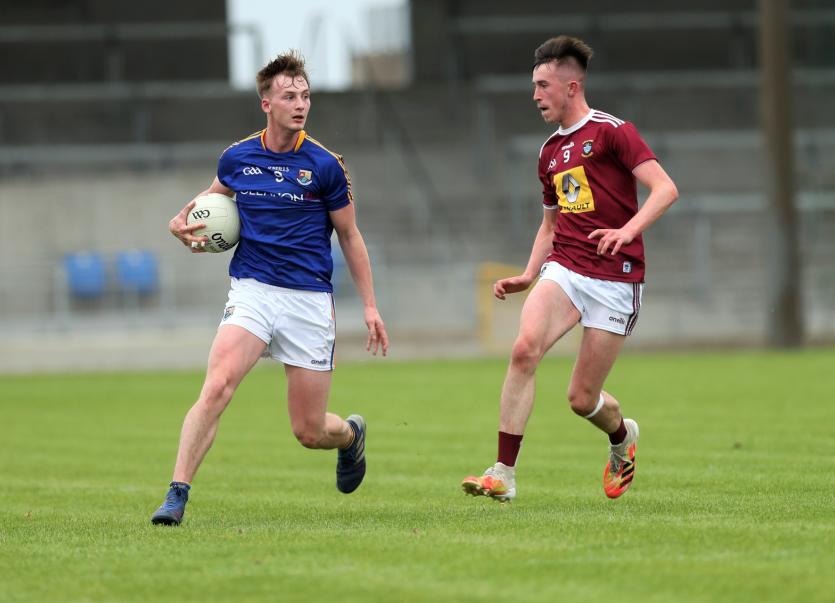 Tadhg McNevin pictured in action for Longford against Westmeath in the Leinster U-20 Football Championshp quarter-final Photo: Syl Healy

Longford suffered a cruel exit from the Eirgrid Leinster U-20 Football Championship when a dreaded penalty shoot-out, with Westmeath winning 5-4, decided the exciting quarter-final clash in a dramatic finish at Glennon Brothers Pearse Park on Thursday evening.

After failing to convert a number of goal chances in the first half; hitting the butt of the post immediately on the changeover and who also missed three frees in the closing stages of normal time, Longford eventually equalised from a mark converted by Jack Duggan in the third minute of stoppage time, 3-5 to 2-8.

Jack Duggan (top scorer with a total of 1-6 to his credit), James Moran and Daniel Reynolds got the goals for Longford and a draw was the least they deserved.

Donal Ledwith’s gallant charges were also the better team in the extra-time period, even if they had to come from behind again to level matters from a free converted by Duggan with a couple of minutes left on the clock.

Moments later another free was awarded to Longford for a foul on Jake Donnelly but the pressure kick was sent wide by Duggan, much to the great relief of lucky Westmeath.

There is really no place in the GAA for a game to be decided in a penalty shoot-out but there had to be a winner on the day and it was Longford who suffered the torment of losing out.

Both sides converted four of the five penalties with Longford keeper Ollie Duffy saving the kick taken by Westmeath’s top scorer Brandon Kelly who registered the impressive tally of 1-5 from play in normal time.

Keelin McGann took the first penalty but his shot was stopped by the Westmeath keeper Sean Martin but all the other kicks were converted with Cian Dooner, James Moran, Jack Duggan and Sean O’Sullivan on target for Longford.

Jack Torpey, Jordan McDonnell, Senan Baker and Stephen O’Connor were spot on for the visitors and so it went to sudden death with Baker successful again to leave Westmeath leading 5-4 in the shoot-out.

Up stepped Dooner to take his second penalty (the GAA rules restrict the shoot-out to the selected five kickers in the sudden death situation) but he drove the ball over the bar as the Westmeath players celebrated a fortunate victory in advancing to meet Offaly in the Leinster semi-final next week.