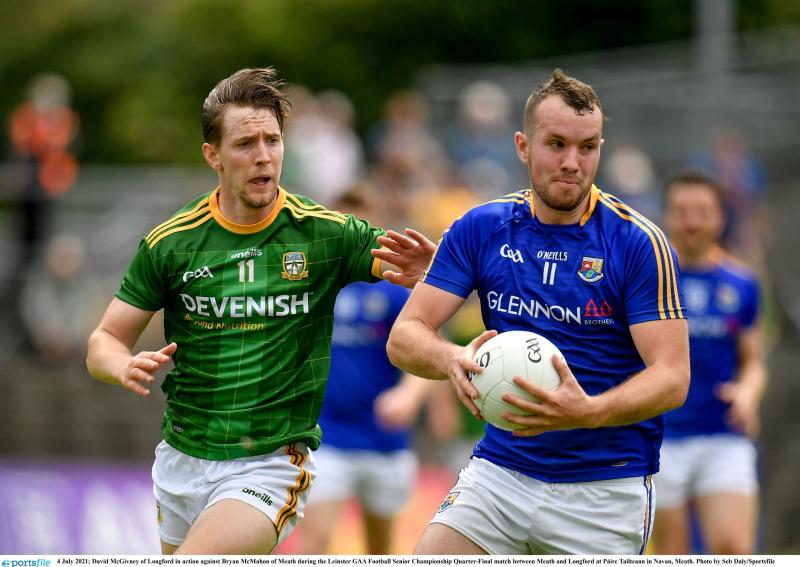 David McGivney on the ball for Longford ahead of Meath opponent Bryan McMahon. Action from the Leinster SFC quarter-final in Navan Photo: Seb Daly/Sportsfile

A short season for the Longford senior footballers started with a demoralising heavy defeat against Derry in the National League and it ended in similar fashion as a far superior Meath side inflicted a demolition job in the Leinster Championship.

500 supporters watched the Royal County cruise to a landslide 22 points win in the quarter-final clash at Pairc Tailteann, Navan on Sunday last and it was all too much for Longford manager Padraic Davis who announced his decision to resign in the aftermath of this very poor performance that must be hurting the players badly.

During his three years in charge, Davis achieved some good results (O’Byrne Cup success in 2020) and deserves considerable credit for guiding the county to survival in Division 3 of the National League thanks to that great victory over the reigning Munster champions Tipperary in the relegation play-off a few weeks ago.

Unfortunately, Longford came up against a physically stronger and superbly conditioned Meath team who never looked like slipping up from the moment centre-half-back Shane McEntee burst through to fire home a cracking goal with just a couple of minutes gone on the clock.

That was a real sickening blow but Longford tried very hard to recover and were only a couple of points adrift (1-5 to 0-6) when David McGivney slotted over a free in the 27th minute.

The gap could have been cut to the minimum when Darren Gallagher had a goal attempt blocked down in the 30th minute when it might have been wiser to shoot over the bar and Meath then took over completely in producing a storming finish to the first half.

A point from wing back Fionn Reilly was followed by further scores from Bryan McMahon (free), Bryan Menton, Joey Wallace and Jordan Morris and things went from bad to worse for Longford when corner-forward Morris flicked the ball to the net in the third minute of stoppage time.

So after conceding 1-5 in a short space of time the shattered underdogs found themselves ten points down at the break (2-10 to 0-6) with the game all over as a contest and Meath strolled their way through the second half in adding another 2-12 to their most impressive tally.

Longford suffered another setback when midfielder Gallagher, after taking a heavy knock in the 27th minute, was forced to retire at half-time and Meath - hovering between Division 1 and 2 status - were clearly in a different league.

Committing too many mistakes, the midlanders were outclassed in this extremely harsh reality check and the search now begins for a new manager following the departure of Davis.

The scene for this nightmare defeat was set right from the off with hugely influential Meath players Bryan Menton and Donal Keogan, listed among the substitutes, fit to start after recovering from their respective injuries.

Longford, on the other hand, were forced to field without the injured Colm P Smyth whose place on the team was taken by Daniel Mimnagh.

Meath went for the jugular straight away and after the early goal from Shane McEntee following a well-worked move, a point apiece followed from Bryan McMahon and wing back Cathal Hickey, the latter blasting the ball over the bar when a goal was on.

After Rian Brady was wide from a mark, he got Longford’s first score in the 6th minute and the visitors managed to put it up to Meath for most of the first half.

There was a strong penalty claim in the 18th minute when Kevin Diffley, with a good chance of scoring a goal, was fouled very close to the square.

Robbie Smyth fired over the resulting free to leave Longford trailing by 1-3 to 0-4 with the other scores coming from Darren Gallagher (free) and Dessie Reynolds.

The third Meath point was registered by Cillian O’Sullivan who burst through to fist the ball over the bar when a goal was on and it was still a tight enough game with the score standing at 1-5 to 0-6 in Meath’s favour with 32 minutes gone on the clock.

Rian Brady and David McGivney were on target for Longford with Jordan Morris and Matthew Costello (‘45) on the mark for Meath but then the floodgates opened prior to a torrential burst of rain just before the break.

Longford were reeling on the ropes with Meath, moving up another gear, clocking up 1-5 without reply to establish a commanding position and the killer blow had been well and truly struck.

The less said about the so one-sided second half the better as Longford fell even further behind with excellent wing back Cathal Hickey scoring the third goal for Meath in the 48th minute.

Impressive substitute James McEntee landed four of Meath 12 points on the changeover with the other scores coming from Bryan McMahon (2), Hickey, Morris (2),  Eamon Wallace and  O’Sullivan (2).

The fourth Meath goal materialised in the 69th minute when substitute James Conlon was left with the simple task of shooting to the net from a few yards out to complete Longford’s tale of woe.

The losers added another six points to their tally in the second half, the best of those coming from Kevin Diffley with David McGivney (two frees), Rian Brady (free), Joseph Hagan (mark) and substitute Darragh Doherty also on target.

The Longford squad will certainly want to forget this hammering in a hurry but at least the new manager can look forward to a wide open Division 3 league campaign in 2022 against Westmeath, Laois, Fermanagh, Wicklow, Limerick, Antrim and Louth.