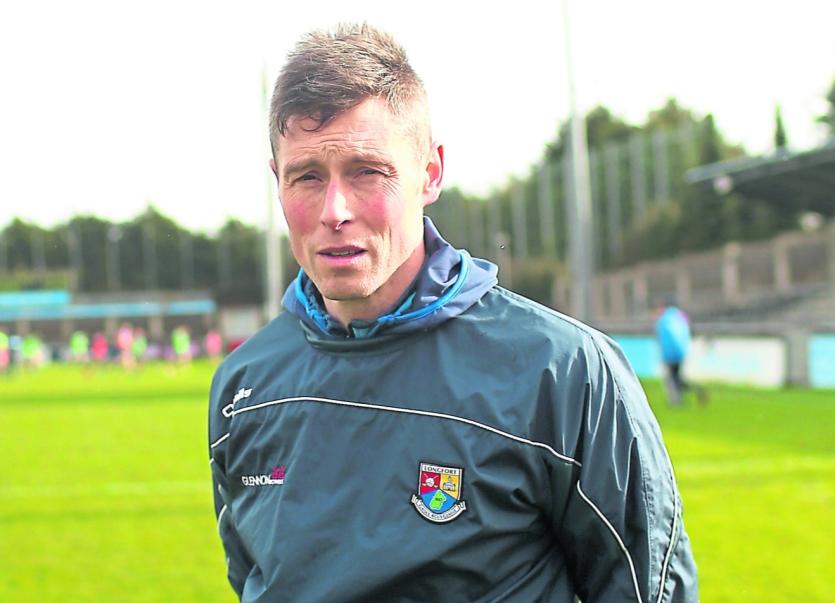 Abbeylara clubman Donal Ledwith, the manager of the Longford U-20 football team who beat Louth in the first round of the Leinster Championship

It was a shame that this thrilling Leinster U-20 Football Championship first round clash at the Haggardstown grounds on Thursday evening was marred by controversy at the end.

For the last few minutes of the game Longford had scored 4-11 and the press people had the same scoreline, unfortunately the scoreboard had 4-10.

Louth scored two late points thinking that they had brought the game to extra-time but in fact it was a one point win for Longford.

It was a terrific result for Donal Ledwith’s side who now play neighbouring rivals Westmeath in the quarter-final at Glennon Brothers Pearse Park next Thursday evening, July 8, throw-in 7.30pm. Westmeath scored a surprise win over Kildare.

Louth celebrated as both teams surrounded the officials. A few minutes later it was announced that Longford had indeed won. It was tough on Louth who trailed by 12 points in the early stages of the game.

Longford made a whirlwind start and were 3-3 to no score ahead within the first five minutes. The impressive Keelin McGann got the first goal inside the opening minute; Jake Donnelly gained possession and raced through and avoided challenges before passing to McGann who made no mistake in finding the back of the net.

McGann then fired over two points and in the third minute Euan Finneran got Longford’s second goal. Two minutes later Daniel Reynolds shot low to the net and McGann hit over a third point.

Louth got their opening score in the seventh minute; a pointed free from the excellent Conal McCaul. In the 10th minute Longford keeper Ollie Duffy pulled off a great save to deny McCaul. Eoghan McCormack then hit over a fine point in the 14th minute.

Louth kicked over four points in a row as they tried to get back into the game. Longford got points through Reynolds and an excellent McGann score in the 24th minute put 10 between the sides.

Longford found it hard to contain Louth wing-back Gabriel Bell and he got their first goal just before half-time with Conan McCaul instrumental in the score. Longford led at the break by five points: 3-7 to 1-8.

Louth made a strong start to the second half and the lead was just one goal in the 34th minute. With 11 minutes to go it was a one point game. Longford needed something and it was substitute Jack Duggan who delivered, firing the ball to the net to give his side some breathing space.

In the final minute Louth scored a goal through Bell who found the net with a terrific strike to cut the lead to two. Luke Matthews then scored a ‘45 for Louth in stoppage time to leave just one between the sides but Longford held out in a dramatic finish.