Longford in control against Carlow despite some anxious moments 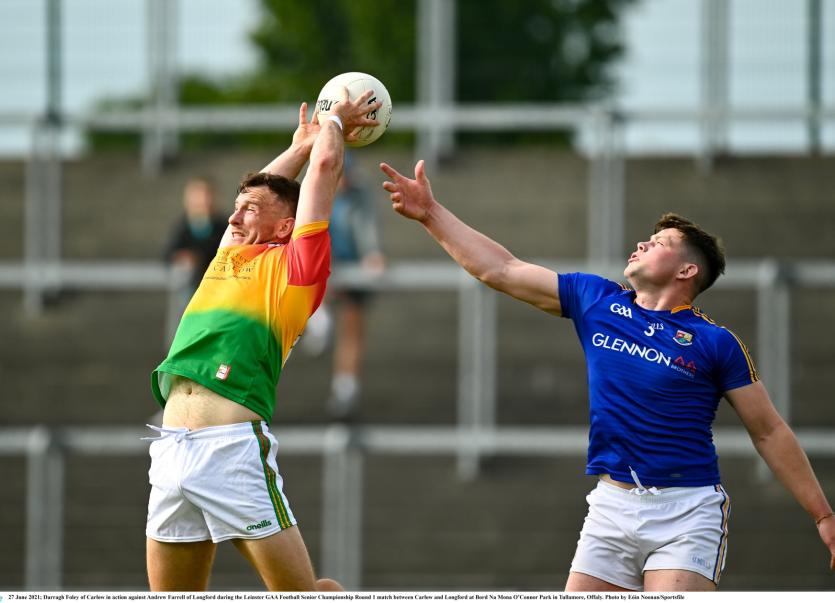 Darragh Foley winning the ball in this Carlow attack ahead of Longford defender Andrew Farrell. Action from the Leinster SFC first round game Photo: Eóin Noonan/Sportsfile

The Longford supporters among the Covid restricted 200 attendance at O’Connor Park in Tullamore must have been feeling a little bit confused on their way home on Sunday evening last after watching their county cross the first hurdle in the Leinster Senior Football Championship.

Nobody can argue with the fact that Longford were in control against Carlow and fired over the impressive total of 22 points from play but several goal chances were squandered in completing the task of moving on to tackle Meath in the quarter-final in Navan this Sunday, throw-in 3pm.

However, some anxious moments were suffered during the course of the exciting roller coaster second half with keeper Paddy Collum at his best in producing a couple of superb saves to consolidate the tight grip on the game.

With Darren Gallagher completely dominant at centrefield in the first half, Longford had established a commanding 0-12 to 0-3 lead approaching the break and could have been even further in front.

Gallagher missed a couple of clear-cut goal chances in the first quarter of the contest with his close range shots saved by the opposing keeper Ciaran Cunningham and Carlow were fortunate to be trailing by just two points (0-4 to 0-2) at the first water break.

Having said that, Andrew Farrell came to Longford’s rescue when he blocked a goal attempt from Carlow midfielder Sean Gannon in the 16th minute but it was one-way traffic during the remainder of the first half.

Padraic Davis must have been very pleased as he watched his side shoot some excellent  scores, with Robbie Smyth and Rian Brady particularly impressive, and it looked like Longford were cruising to their expected victory, even though Carlow did close the gap to trail by 0-13 to 0-6 at the break.

Kevin Diffley got their opening score with less than two minutes gone on the clock while the other Longford points were registered by Michael Quinn, Darren Gallagher (three frees), Rian Brady (3), Robbie Smyth (3), Dessie Reynolds and Donal McElligott, the captain making his first start this season after recovering from injury.

Darragh Foley (three frees), Colm Hulton, Chris Blake and Paul Broderick (free) were on target for Carlow in the first half but a number of changes (four in total) were made by their manager Niall Carew in a short space of time and which  improved what was looking like a hopeless situation.

Quality forward Broderick did not start for some reason (probably injury related) but was brought on just before the break and went so close to scoring a goal in a storming start to the second half with his flick from a few yards out parried over the bar by the agile Paddy Collum.

There were other Carlow points from Chris Blake and Broderick (free) immediately on the changeover but Longford quickly asserted their superiority with three points in a row, the first from Dessie Reynolds who blasted the ball over the bar when a goal was there for the taking in the 40th minute.

A further four points followed, a brace from David McGivney with Rian Brady and Robbie Smyth on the mark again as Longford led by 0-18 to 0-10 but Carlow were given a glimmer of hope with a cracking goal from Conor Crowley in the 48th minute.

When Joseph Hagan then shot over the bar, the entire six starting forwards had got their names on the scoresheet and it got even better for Longford with Smyth (a marvellous strike from a tight angle), Hagan and Brady shooting a further point apiece.

Carlow were now nine points behind yet again (0-22 to 1-10) but battled it out to the bitter end in adding another goal and three points to their very respectable tally.

Darragh Foley found the back of the Longford net in the 69th minute with the other scores  coming from Foley, Chris Blake and Colm Hulton.

And were it not for a brilliant reflex save from Paddy Collum a third goal Carlow would have materialised in the 63rd minute with a great move almost raising the green flag but the Longford keeper kept out a flick from Chris Blake.

Although they tacked on three more points through Darren Gallagher (who fisted the ball over the bar), prominent defender Patrick Fox and substitute Dylan Farrell (making his senior championship debut), it remains a mystery how Longford failed to score a goal on this occasion.

The chances kept on coming in a wide open game with Michael Quinn and Fox, surging forward at every opportunity, having shots blocked in goal attempts.

Another substitute Liam Connerton then had a goal effort saved by the Carlow keeper Cunningham who somehow managed to keep his net intact during the course of the game.

Longford won by six points in the end but the margin could have been doubled such was their much greater share of the possession and the scoring chances created.

The focus now switches to the next round clash on Sunday and with the players growing in confidence they will not fear Meath, even at Pairc Tailteann.