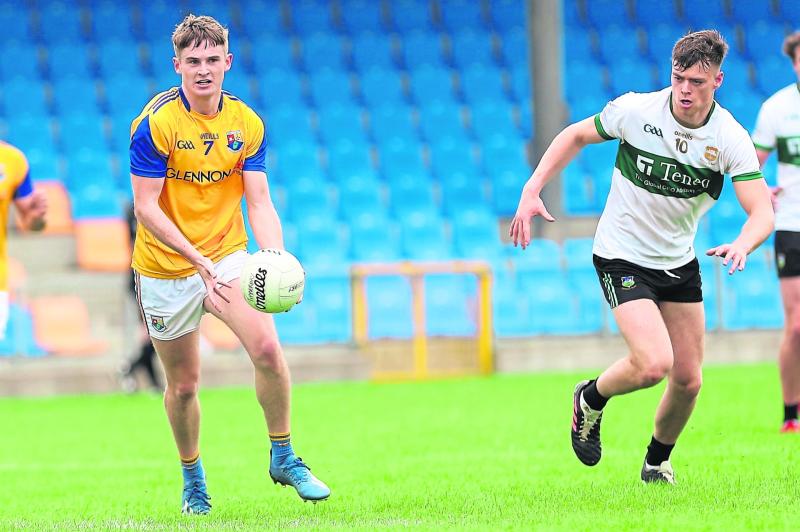 From the moment Dessie Reynolds broke through the Tipperary defence to score the decisive only goal with 14 minutes gone in the second half, the force was with revitalised Longford who stepped up another gear to win by the comfortable margin of seven points in the finish.

Longford certainly picked the right opportunity to register their first win in the Covid hampered short season when they produced their best performance this year to take Tipperary down at Glennon Brothers Pearse Park on Sunday last.

Retaining the Division 3 status in the National Football League was the priority for Longford manager Padraic Davis and that aim was achieved with some style in the relegation play-off against the reigning Munster champions.

Tipperary appeared to be getting on top when wing back Padraic Looram surged forward to shoot over the bar in the 48th minute to leave the sides deadlocked at 0-8 apiece but Longford then broke in a quick counter-attack moments later to get the score that changed the course of the game.

The perfect pass from the influential playmaker Rian Brady put the impressive Reynolds in the clear and the Ballinalee man shot past the opposing keeper Evan Comerford in finding the net from a few yards out.

This turning point  proved to be a shattering blow for a very disappointing Tipperary outfit who were missing a few regulars but Longford were also understrength in the battle to avoid the dreaded drop down into Division 4 next season.

Forced to field without injured forwards Daniel Mimnagh, Barry McKeon and Liam Connerton with a one match suspension ruling out defender Gary Rogers, there was a lot to admire about the determined manner in which Longford managed to survive in the so competitive third tier of the league

A major impact was made by half forward Dessie Reynolds who scored 1-2 from play and whose pace posed a lot of problems for the Tipperary defence.

Longford wing backs Colm P Smyth and Iarla O’Sullivan also figured most prominently in this fine success while the commanding Andrew Farrell was a real tower of strength in the full-back position in direct opposition to All-Star full-forward Conor Sweeney.

As it turned out, the entire Tipperary attack failed to register a score from play (great credit to the home team defence) and it must be said that Longford committed very few errors, apart from squandering a few scoring chances including a goal attempt from Robbie Smyth in the 51st minute.

A superb slick move involving Colm P Smyth and Dessie Reynolds created a clear-cut opportunity for Robbie but he flicked the ball straight at the Tipperary keeper and the danger was cleared.

Midfielder Kevin Diffley came a lot more into the game in the second half while the introduction of substitutes Darragh Doherty and Oran Kenny definitely made a difference and particularly so in the final quarter of the contest as Longford pulled right away for a fairly emphatic victory in the end.

This positive result is a big boost in the build up to the Leinster Championship first round clash against Carlow at O’Connor Park, Tullamore on Sunday June 27 with the winners advancing to play Meath in the quarter-final a week later.

A couple of hundred supporters were allowed to attend the match against Tipperary who had Michael Quinlivan back in action for the first time this year.

However, things did not go well for the former All-Star attacker who received a black card for showing dissent after he had a point harshly disallowed in the closing stages of the first half.

Some of the decisions made by the whistle happy Laois referee Seamus Mulhare were bizarre, to say the least, and his general poor handling of this important match left a lot to be desired.

Tipperary suffered a setback when their full-back Alan Campbell had to retire injured with ten minutes gone in the game and at the first water break it was Longford who held a slender 0-5 to 0-4 advantage with their opening score coming from Dessie Reynolds after just 50 seconds.

The other points were fired over by Rian Brady, Darren Gallagher (two frees) and Joseph Hagan while Steven O’Brien and Conor Sweeney (three frees) replied for the visitors.

A couple of cracking points from Reynolds and Hagan extended the Longford lead, the latter on target in the 25th minute, while Tipperary got the last score of the first half with Sweeney converting another free to leave his side trailing by 0-7 to 0-5 at the break.

The home side failed to capitalise on the numerical advantage when Quinlivan was sin-binned in the 34th minute and it was Tipperary who made the better start to the second half with a point from midfielder Paudie Feehan.

Back came Longford with a point from another Darren Gallagher free but were quickly under pressure again as Tipperary responded with good scores from defenders Kevin Fahey and Padraic Looram in the 46th and 48th minutes.

A goal was on when Looram burst through to land a point and with the sides now all square (0-8 to 0-8) it looked like Tipperary were gaining the upper hand with a goal attempt from Steven O’Brien blocked by Andrew Farrell during this good spell for the visitors.

The best they could manage was a consolation score from a free converted by substitute Sean O’Connor in the 69th minute and they have fallen far since the shock Munster Championship triumph only a few months ago.

The Longford senior footballers, on the other hand, can now look forward to playing Laois, Westmeath, Antrim, Louth, Fermanagh Limerick and Wicklow in a wide open National League Division 3 next season.