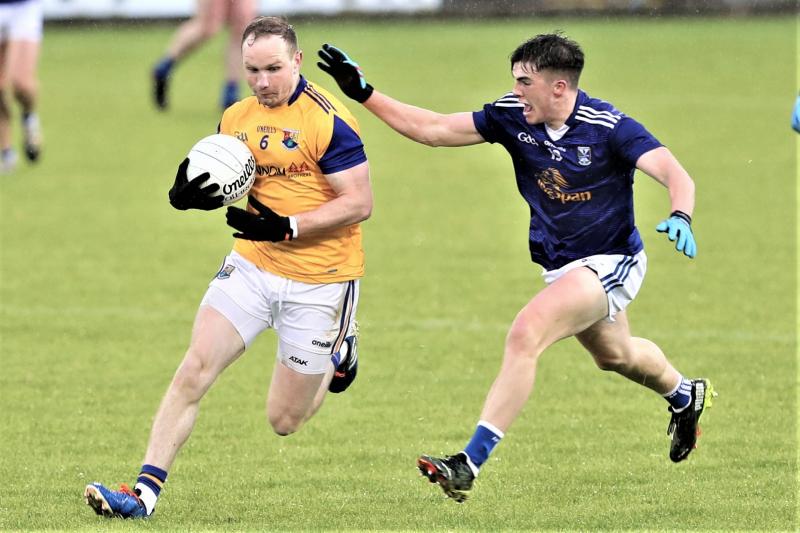 Gary Rogers on the ball for Longford against Cavan. Action from the National Football League Division 3 North Round 2 game at Kingspan Breffni on Saturday evening last Photo: Syl Healy

No matter what happens against Fermanagh at Brewster Park in Enniskillen this weekend, a relegation play-off is looming for Longford in the fierce fight for survival in Division 3 of the National Football League.

And a last ditch clash against the Munster champions Tipperary (or even Offaly) might well materialise, depending on the final round results in the north and south sections this Saturday with all four games fixed to start at 3pm.

Longford will need to beat Fermanagh by at least a three-point margin to avoid finishing bottom of their group in the hope of getting a supposedly easier task against Wicklow or Limerick in the battle to escape the dreaded drop down into Division 4 next season.

Manager Padraic Davis will be fairly pleased with the improved performance his under pressure players produced in the defeat against Cavan at Kingspan Breffni on Saturday evening last.

Longford trailed by just two points at the break but the current Ulster champions called on all the valuable experience gained in operating at a higher level in the recent past to assert their superiority in the second half.

In a stark statistic, six of the Cavan scores in the game came from defenders Oisin Kiernan (2), Ciaran Brady, Padraig Faulkner and goalkeeper Raymond Galligan (2), a clear indication of the very tough task Longford had to deal with against stronger opposition.

Mickey Graham’s charges came out on top by the comfortable margin of six points in the end (1-19 to 1-13) but Longford can take some positives out of the game in the belief that Fermanagh can be beaten.

Former Tyrone star Ryan McMenamin is now the Fermanagh manager and after scoring a surprise win at home to Cavan in the opening round, the Erne county are in contention to qualify for the Division 3 semi-finals.

However, the heavy 5-13 to 0-9 defeat suffered in the away fixture against rampant Derry last weekend was a shattering blow but they will be very determined to bounce back in sticking to the usual blanket defence gameplan.

Top quality attacker Sean Quigley is very much the main man in a generally young Fermanagh team who are missing many established players this season.

The deadly accurate Quigley clocked up 0-9 and 0-7 in the previous games against Cavan and Derry respectively and is a serious threat in the full-forward-line.

For Padraic Davis it is all about consolidating Longford’s Division 3 status for another season in the aftermath of the defeats against Cavan and Derry.

“It was never more difficult than it is right now. The regions are completely unbalanced both in Division 3 and Division 4.

“It’s an unfortunate situation but we still have a last gasp throw of the dice as has everybody else. It’s hugely important to consolidate our place in Division 3,” stated the county senior football boss.

500 supporters will be allowed attend the game in Enniskillen

Fifty match tickets are to be made available to the Longford County Board for this Saturday's National Football League meeting with Fermanagh in Enniskillen, throw-in 3pm.

However, because cross-border travel for non-essential reasons is discouraged, the tickets won’t be made available to Longford supporters.

Instead, Longford GAA have been advised that the tickets should be given to non-playing players and county officials.

In all, 500 spectators will be allowed to attend Saturday's Allianz Division 3 North game at Brewster Park and other games in the Six Counties this weekend.

In a statement issued by the GAA, the organisation confirmed that 500 spectators will be allowed attend Allianz League matches in the Six Counties this weekend.

The following breakdown of how tickets should be distributed was outlined:

· 50 complimentary tickets to travelling county from outside the north (non-playing players and county officials, no sale for spectators.

· 400 tickets to each host county – to sell locally only.

Tickets will be sold via county boards locally with the following pricing:

£15 Division 1 and 2 Football & Division 1 Hurling and £10 Division 3 and 4 Football and Division 2 and 3 Hurling. There will be no concession tickets due to limited numbers.