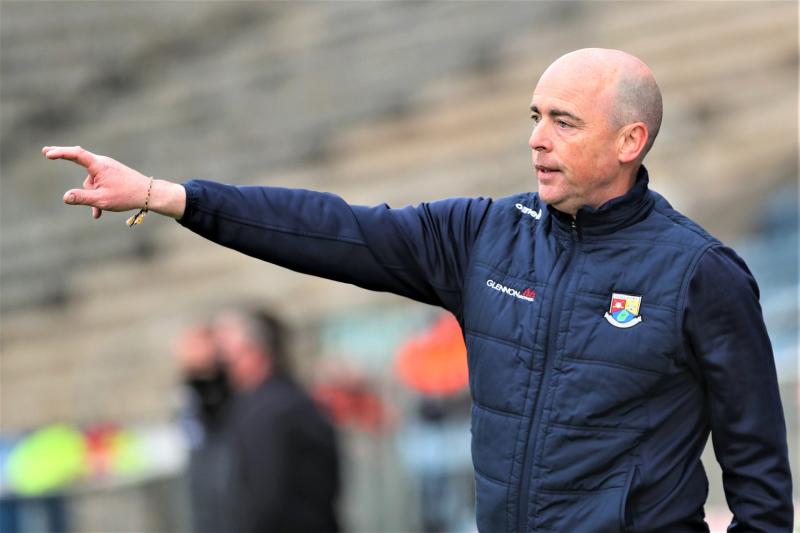 For Longford manager Padraic Davis, his side’s performance against Cavan on Saturday evening last was better than their previous game, but still not good enough for them to come away with a positive result.

He said: “That little bit of quality that we needed, that they had and we didn’t, to get us to 1-16/1-17. It was probably that, that cost us in the end. It was an improved performance no doubt but you’d like to cross the line and get a couple of points on the board.”

After the Derry game, Davis wanted a reaction from his players. It ended in another defeat but he was able to take some positives out of the game.

The Longford manager said: “It was a spirited performance, there was none of them that didn’t give it everything. They just couldn’t get us across the line. They battled until the bitter end. It’s very disappointing but all we can do is pick it up and go again.”

Cavan were quick on the ball and had quality all over the field, and in the players that came on.

Davis said: “Let’s not forget what we played. We played a team that was in Division 1 and 2 for the last six years. They are the current Ulster Champions. We are not talking about the usual teams that we play.

“It’s a big step-up in terms of what we are playing but we are disappointed that we didn’t show another little bit to close that gap. We reeled them in twice but we couldn’t complete the mission.”

Next up for Longford is a trip to Brewster Park in Enniskillen to face Fermanagh this Saturday.  The Erne County beat Cavan but lost heavily to Derry last weekend.

Saturday’s results will determine where Longford finish in the table and who they will meet  in the relegation play-off. Davis isn’t too worried about final standings, he wants to see an improvement from the Cavan game.

He said: “All we want to do is keep that improvement. We are not looking across at the other side of the at division. It’s about putting in a big performance in Fermanagh who traditionally put 15 men behind the ball. They will continue to do that even though they conceded five goals against Derry.”

Davis knows what to expect from Fermanagh. With their blanket defence, it won’t be easy to break them down.

“We know what we face, Derry provided some of that but not to the same extent. It’s going to be a hard graft to try and bring them down. We’ll try and do that.”

For Davis it is all about consolidating Longford’s place in Division 3 for another season. That is the sole focus at the moment.

“It was never more difficult than it is right now. The regions are completely unbalanced in Division 3 & Division 4. It’s an unfortunate situation but we still have a last gasp throw of the dice as has everybody else.

“It’s not looking simple on that other side of the draw, it’s looking like it’ll be Wicklow and possibly Tipperary, who are the current Munster champions. It’s hugely important to consolidate our place in Division 3,” commented the Longford boss.