Tale of woe as Longford suffer shattering defeat against Derry

Major improvement needed for NFL showdown away to Cavan on Saturday 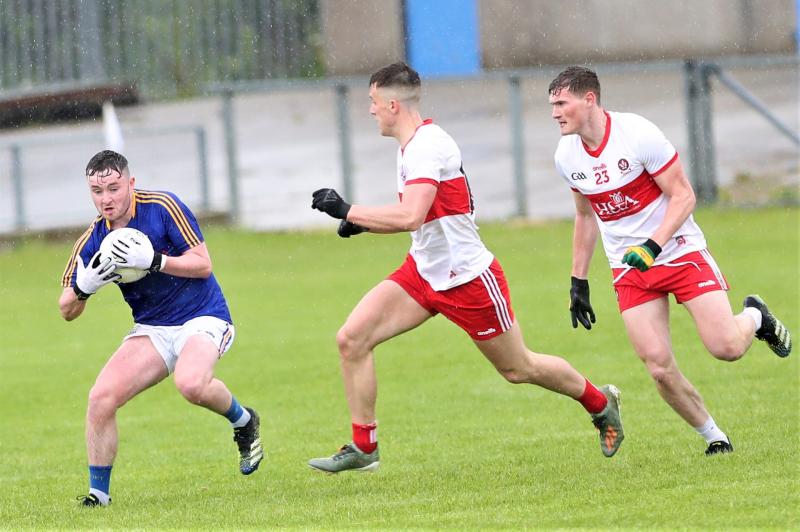 Slick and sharp Derry were in a different league as Longford suffered a shattering defeat in a terrible start to the 2021 season and now face a make or break clash against the Ulster champions Cavan at Kingspan Breffni this Saturday evening.

Producing one of their poorest performances for quite some time, Longford were destroyed by impressive Derry who cruised to a very easy win in the National Football League Division 3 North Round 1 clash at Glennon Brothers Pearse Park on Saturday evening last.

Outplayed in virtually every position on the pitch and no match for the physically stronger Derry side, Longford trailed by 0-8 to 0-2 at the break with Darren Gallagher (free) and Daniel Mimnagh getting the scores for the home side in the first quarter of the game.

And things went from bad to worse in the second half after Longford were reduced to 14 players when midfielder David McGivney was sent to the sin bin after receiving a black card with just four minutes gone on the changeover.

Derry took full advantage of their numerical advantage to extend their commanding advantage, adding five more points to their tally during the ten minute period that McGivney was stuck on the sideline.

Longford had to wait until the 58th minute for their first score in the second half when Darren Gallagher (the captain in place of the injured Donal McElligott) landed a well struck effort.

Further consolation points followed from substitute Larry Moran and Gallagher and there was just no stopping the rampant Derry outfit who adapted a lot better to the wet conditions allied to their superior support play.

Shane McGuigan and Niall Loughin clocked up a total of 13 points between them (just two from play) while Conor Glass (a class act) and Emmett Bradley also figured very prominently for Derry with the influential midfield duo firing over five points - all from play.

It was a demoralising setback for Longford in a dire display that was hardly a true reflection of their actual ability.

Such a hammering was a sickening blow and manager Padraic Davis will be demanding a major improvement for the showdown against neighbouring rivals Cavan who are also under considerable pressure after losing to Fermanagh.

Longford were competitive in the first quarter of the contest against Derry and opened the scoring when Darren Gallagher converted a free with a couple of minutes gone on the clock.

Derry came storming back to fire over three points in a row through Conor Glass (a beautiful strike), Shane McGuigan (free) and Niall Loughlin (‘45) before Longford went on to enjoy their best spell in the game.

But bad wides by Oran Kenny and Gallagher did not help their cause and the home side got their second score in the 13th minute when a shot by Daniel Mimnagh was parried over the bar by the opposing keeper Oran Lynch to leave just the minimum of margins separating the sides.

Another wide followed from Mimnagh but Derry then stepped up another great gear to register five more points during the remainder of the first half - a brace apiece from McGuigan (frees) and  Loughlin (free and ‘45) with the outstanding Glass on target again.

It could have been even worse for Longford as keeper Paddy Collum produced a point-blank save to prevent Paul Cassidy scoring a goal in the 33rd minute while Derry hit the upright twice, apart from kicking five wides in the first half.

Nothing was going right for Longford with midfielder Kevin Diffley forced to retire injured at the break and the second half was only a minute old when the always dangerous Derry full-forward Shane McGuigan fired over a fine point - his first from play.

Losing David McGivney for ten minutes after a black card offence left Longford facing a mission impossible and Derry could even afford to shoot a total of eight wides in the second half on their way to a most emphatic success.

Twelve more points followed for the visitors, one of which was a glorious goal chance for McGuigan who blasted the ball over the bar from close range in the 50th minute.

Three of the other Derry scores came from Emmet Bradley, and the same again from Niall Loughlin (all frees), while Padraig Cassidy, Ciaran McFaul, Shane McGuigan (two frees) and substitute Ben McCarron accounted for the rest of the points in this rout.

It was embarrassing for Longford but they battled it out to the bitter end and almost snatched a late consolation goal in the 68th minute when Michael Quinn had a shot blocked down from a few yards out.