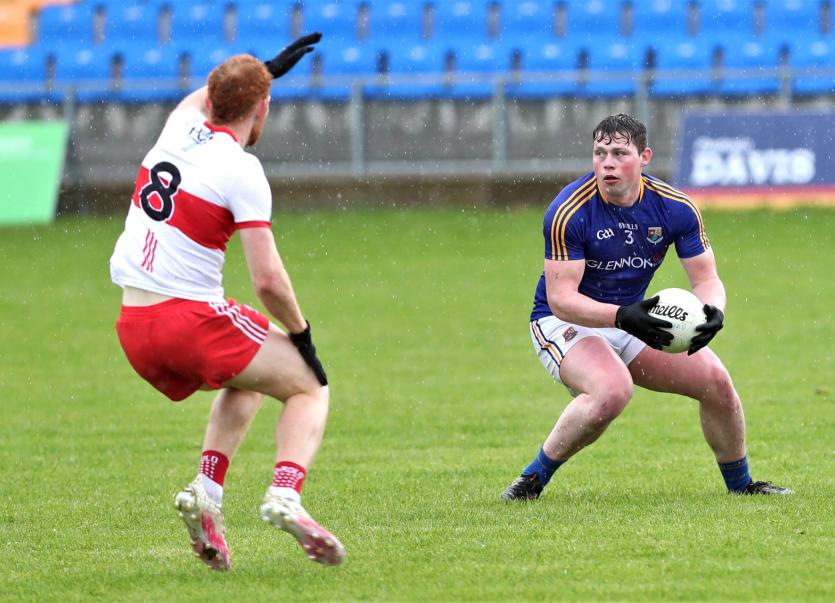 Producing one of their poorest performances for quite some time, Longford were destroyed by impressive Derry who cruised to a very easy win in the National Football League Division 3 North Round 1 clash at Glennon Brothers Pearse Park on Saturday evening.

Outplayed in virtually every position on the pitch and no match for the physically stronger Derry side, Longford trailed by 0-8 to 0-2 at the break with Darren Gallagher (free) and Daniel Mimnagh getting the scores for the home side in the 2nd and 13th minutes.

And things went from bad to worse in the second half after Longford were reduced to 14 players when midfielder David McGivney was sent to the sin bin after receiving a black card with just four minutes gone on the changeover.

Derry took full advantage of their numerical advantage to extend their commanding advantage, adding five more points to their tally during the ten minute period that McGivney was stuck on the sideline.

Longford had to wait until the 58th minute for their first score in the second half when Darren Gallagher (the captain in place of the injured Donal McElligott) landed a well struck effort.

Further consolation points followed from substitute Larry Moran and Gallagher and there was just no stopping the rampant Derry outfit who adapted a lot better to the wet conditions allied to their superior support play.

Shane McGuigan and Niall Loughin clocked up a total of 13 points between them (just two from play) while Conor Glass (a class act) and Emmett Bradley also figured very prominently for Derry with the influential midfield duo firing over five points - all from play.

It was a demoralising defeat for Longford who face another very difficult game against the Ulster champions Cavan at Kingspan Breffni Park next Saturday evening.