David McGivney back in action for the midlanders 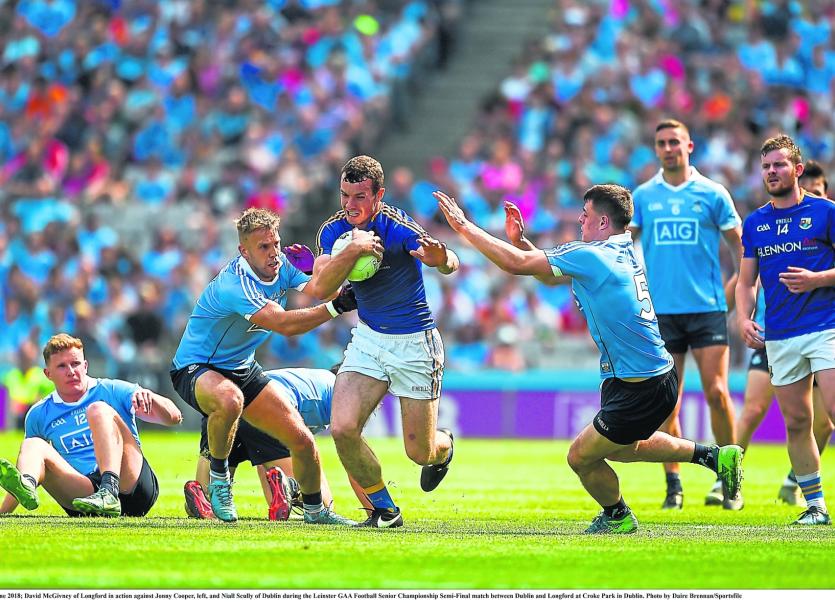 David McGivney on the ball for Longford in his bid to evade the challenge of Dublin opponents Jonny Cooper and Niall Scully. Action from the 2018 Leinster SFC semi-final at Croke Park.

Mullinalaghta’s David McGivney will start for Longford, having made his last appearance for the county in the 2019 All-Ireland SFC Qualifier Round 2 defeat against Tyrone at Pearse Park.

Nine of the Derry team that started the 2020 meeting of the teams while Benny Heron, Paul Cassidy and Conor Glass came off the bench.

Having handed out 11 debuts in his first season as Derry boss, there is a more settled look to Rory Gallagher's squad this season.

There is a first inclusion for Gareth McKinless since Derry's 2016 All-Ireland Qualifier win over Cavan. Danny Tallon, who started all 10 games last season, isn't included in the starting line-up.

There is also no place for Slaughtneil defender Karl McKaigue who has made a full recovery from the torn Achilles sustained on club hurling championship duty last summer.

Goals from Patrick Kearney and Paul Cassidy guided Derry to victory when the sides met last season at Celtic Park.

Derry and Longford have met eight times in the last two decades, in league and championship. The Oakleafers have to go back to 2002 for their last win at Pearse Park, when two Anthony Tohill goals and an inspired performance from current selector Enda Muldoon put Derry on their way to victory.

In the other game in Division 3 North, Ulster champions Cavan take on Fermanagh on Saturday evening in Brewster Park (7pm).