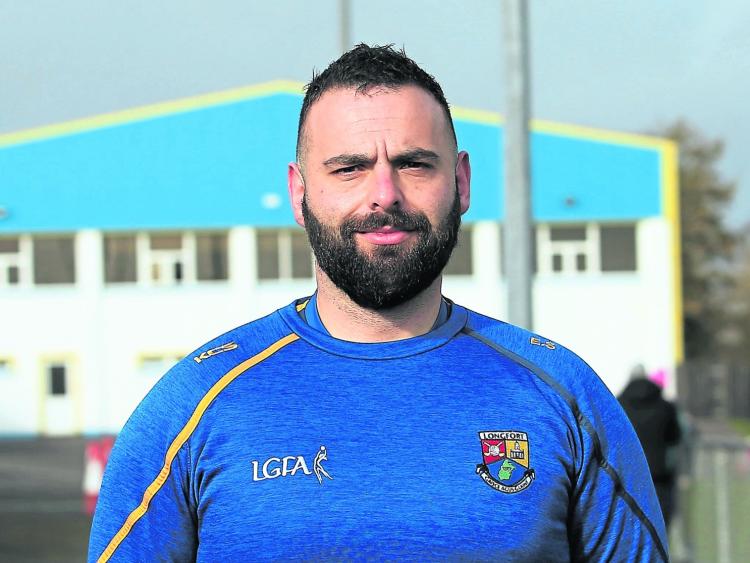 Westmeath native Enda Sheridan (Finea), who has stepped down as the manager of the Longford ladies football squad after two years in charge Picture: Syl Healy

When Enda Sheridan took over as Longford ladies football manager two years ago, he knew rebuilding needed to take place but never expected that during his tenure he would give 22 players their senior-inter county debut.

In 2018 Longford had retained their Intermediate status by defeating Fermanagh in the relegation final and stayed in Division 3 due to Leitrim conceding their final league game.

Last year they got to the Division 3 semi-final only to be beaten by Meath, who went on to win the league title.

Sheridan knew it was going to be tough to emulate 2019. He said: “We lost a lot of players this year for one reason or the other. We didn’t have a good league campaign.

“It was a brand new panel again. The one positive from my time there was 22 players making their senior inter-county debut.”

Longford have a young panel with members of the All-Ireland U-16 ‘B’ and Minor ‘B’ winning teams given their chance to play senior football.

The Finea native was unable to blend youth with experience because of the loss of experienced players. He said: “Of the team that won the All-Ireland Junior championship back in 2016, only two of the starters are still playing for the county; Aisling Greene and Emer Heaney.”

Despite the tender age of his panel this year Longford competed well in games, despite the results.

The real eye opener was their championship clash with Westmeath; a side that were relegated from the senior grade last year.

Westmeath are favourites to win the All-Ireland Intermediate championship this year after  advancing to take on Meath in the final.

Sheridan said: “They were so young and there was a bit of bad luck in getting Westmeath in the draw for the group stage of the championship. We were within scores of teams in the league and luck wasn’t on our side”

Looking back on his time in charge of Longford, Sheridan was delighted with how his first year went. From not winning a game in 2018, Longford got to the Division 3 semi-final and were competitive in every game.

He said: “Our first game was against Kildare in Edgeworthstown and we were beaten by a last minute goal.

“With the exception of the games against Meath and Tipperary last year - and they were the All-Ireland Intermediate finalists - we either won, drew or were within a few points of the opposition. ”

Sheridan was full of praise for the Longford Ladies County Board and thanked them for all their hard work.

“The county board have been phenomenal. I can’t speak more highly of Declan Fox (Chairman) and Sandra Hogan (Secretary).

“The girls could not have been better treated. They had food after training, a physio was always at the sessions and strength and conditioning coach Shane Mahon was there 90% of the time.”

Enda Sheridan wished the players well for the future.

“Next season they’ll be a year older and hopefully they can use their experience from the 2020 campaign. They were a great bunch of girls to work with.”