Longford lose control as Laois battle back to snatch win 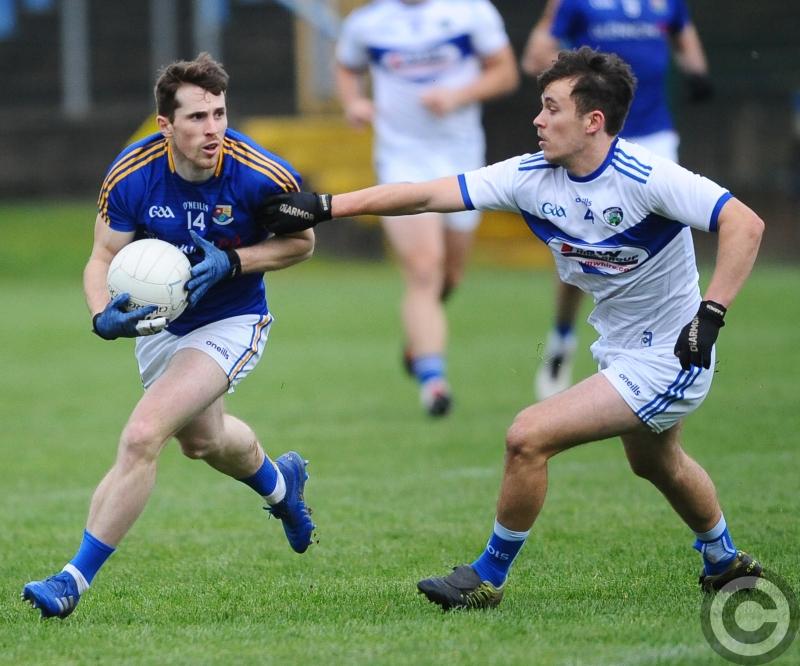 Liam Connerton on the attack for Longford in evading the challenge of Laois defender Brian Byrne. Action from the Leinster SFC quarter-final at Pearse Park on Sunday last Picture: Declan Gilmore

Longford missed a glorious opportunity of a Croke Park appearance and a meeting with the All-Ireland champions Dublin in the Leinster Senior Football Championship semi-final when they let victory slip from their grasp at Glennon Brothers Pearse Park on Sunday last.

Trailing by three points at the break (1-10 to 1-7), Laois were split wide open in the early stages of the second half as the slick home county created a couple of clear-cut goal chances but were unable to find a way past the outstanding opposing keeper Niall Corbet.

Laois saviour Corbet stopped a point-blank shot from the clean through Donal McElligott immediately on the changeover and came to the rescue again in the 40th minute to deny Dessie Reynolds from a few yards out.

Longford had to settle for a point from Daniel Mimnagh in this same attack when they should have established a commanding lead and even at that they went five points clear (1-12 to 1-7) when Reynolds shot over the bar in the 44th minute.

Extremely fortunate to be still in contention, Laois then took over completely to fire over seven points in a row, the last from a free converted in the 60th minute.

Things started to go wrong for a visibly tired Longford team with the quick turnaround from the extremely tough first round win over Louth played in dreadful conditions the previous Sunday taking its toll.

A significant setback was suffered when centre-half-back Gary Rogers was forced to retire injured in the 51st minute and to make matters worse the midlanders were reduced to 14 players when another defender Patrick Fox received a black card in the 59th minute.

That gave Laois a decisive numerical advantage for a ten minute period at such a crucial stage of the game, not long after corner-back Trevor Collins found himself in an attacking position to land the point that put the visitors in front for the first time in the 56th minute.

Wilting Longford were under severe pressure but they somehow found the energy to level matters with a point apiece from a Rian Brady (free), their first score for 20 minutes, and a truly terrific strike from Joseph Hagan from near the sideline in the 66th minute.

A draw and extra-time was a strong possibility but Laois went back in front from a free converted by Gary Walsh in the 70th minute and clinched a very hard earned victory when substitute Sean O’Flynn shot over the bar in the eighth minute of additional time.

Three of the Laois replacements, including the vastly experienced Ross Munnelly in his 19th senior championship season, all got their names on the scoresheet and the O’Moore county were the fresher side in the second half after receiving a bye in the opening round.

Having said that, Longford looked like scoring on the many occasions in which they tormented the Laois defence in a wave of attacks in the first half and were full value for their 1-10 to 1-7 lead at the break.

The absence of the supporters in this highly entertaining behind closed doors fixture due to the current Covid-19 restrictions created a very strange atmosphere and the presence of the vociferous home fans at a compact Pearse Park might have got Longford over the line in this tight contest.

Daniel Mimnagh fired over the opening score in the 2nd minute and another point quickly followed from Liam Connerton before Evan O’Carroll shot over the bar for Laois in the 6th minute.

Moments later Mimnagh sent Dessie Reynolds racing through for a well struck goal and an immediate point from wing back Iarla O’Sullivan left lively Longford leading by 1-3 to 0-1 after just seven minutes.

A brilliant start, to say the least, and wides followed from Rian Brady and Mimnagh before Gary Walsh (free) registered the first of his eight points for Laois.

Longford hit back with a brace of points from Brady (play and free) but Laois got right back into contention with a cracking goal from Paul Kingston in the 15th minute.

The ding-dong battle continued with Longford captain Donal McElligott surging forward to fist the ball over the bar but Laois then got on top for a period with points from Walsh (two frees) and Kingston (a tremendous long range strike) closing the gap to just the minimum of margins (1-6 to 1-5).

Longford came storming back to score four points in the space of six minutes to consolidate their grip on the game with Darren Gallagher (well struck free), a couple from Rian Brady (play and free) and Donal McElligott shooting over the bar.

Laois got two vital scores through Gary Walsh (free) and Mark Barry before the break but should have been blown away in the early stages of the second half, only for their excellent keeper Niall Corbet to prevent McElligott and Reynolds from scoring killer goals for Longford.

That was a turning point in many ways, even though the home side extended their lead with points from Mimnagh and Reynolds and in between Longford keeper Paddy Collum saved a shot from Evan O’Carroll from a tight angle.

Laois, lucky to be still in the hunt for a semi-final spot, made the most of their reprieve to score seven points without reply in a glorious spell between the 45th and 60th minutes.

Substitute Michael Keogh started the comeback and further scores followed from John O’Loughlin (beginning to make his presence felt at centrefield), Ross Munnelly (mark) and Gary Walsh (free) before a poor kick-out by Paddy Collum was punished by Walsh for his only point from play in the 53rd minute.

The sides were now all square and Laois pushed on with points from Trevor Collins and Walsh (free) to lead by 1-14 to 1-12.

Great credit to Longford for the determined manner in which they battled back with points from Rian Brady and Joseph Hagan to leave the sides all square.

But Laois found that little bit extra to get across the line with two more scores (despite a black card for Munnelly in the seventh minute of stoppage time) and now face the daunting task of taking on Dublin in the Leinster semi-final at Croke Park on Sunday.

The last score of the game was kicked by Sean O'Flynn after Michael Keogh was denied a goal when he blasted a shot against the crossbar.

Longford manager Padraic Davis will look back with some regret at this championship game that could and should have been won but it has been a good season and some silverware in the shining light of the O’Byrne Cup success.