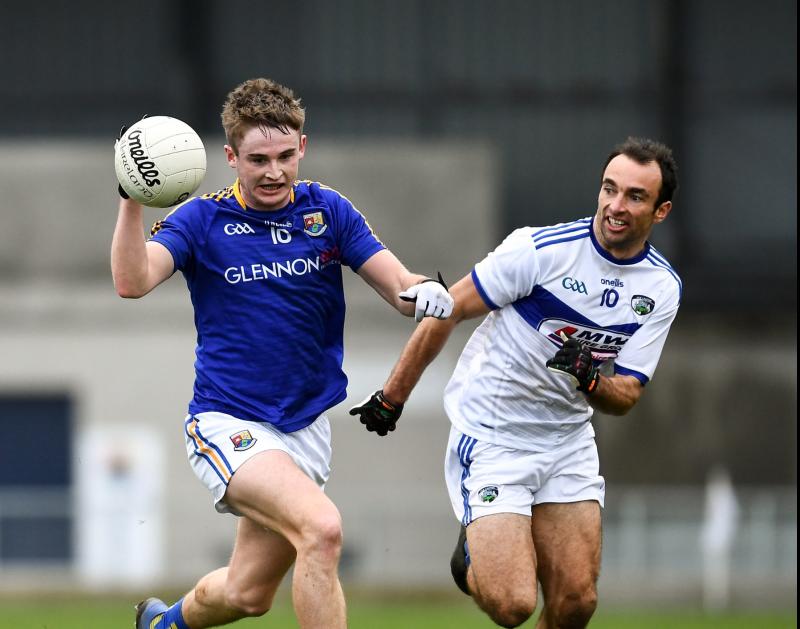 Dessie Reynolds on the attack for Longford with Laois opponent Gareth Dillon in pursuit. Action from the Leinster SFC quarter-final at Pearse Park on Sunday Picture: Ray McManus/Sportsfile

Longford missed a glorious opportunity of a Croke Park appearance and a meeting with the All-Ireland champions Dublin in the Leinster Senior Football Championship semi-final when they let victory slip from their grasp at Glennon Brothers Pearse Park on Sunday.

Trailing by three points at the break (1-10 to 1-7), Laois were split wide open in the early stages of the second half as the sharp home county created a couple of clear-cut goal chances but were unable to find a way past the outstanding opposing keeper Niall Corbet.

Laois saviour Corbet stopped a point-blank shot from the clean through Donal McElligott immediately on the changeover and came to the rescue again in the 40th minute to deny Dessie Reynolds from a few yards out.

Longford had to settle for a point from Daniel Mimnagh in this same attack when they should have established a commanding lead and even at that they went five points clear (1-12 to 1-7) when Reynolds shot over the bar in the 44th minute.

Extremely fortunate to be still in contention, Laois then took over completely to fire over seven points in a row, the last from a free converted by Gary Walsh in the 60th minute.

Things started to go wrong for a visibly tired Longford team with the quick turnaround from the extremely tough first round win over Louth played in dreadful conditions the previous Sunday taking its toll.

A significant setback was suffered when centre-half-back Gary Rogers was forced to retire injured in the 51st minute and to make matters worse the midlanders were reduced to 14 players when another defender Patrick Fox received a black card in the 59th minute.

That gave Laois a decisive numerical advantage for a ten minute period at such a crucial stage of the game, not long after corner-back Trevor Collins found himself in an attacking position to land the point that put the visitors in front for the first time in the 56th minute.

Wilting Longford were under severe pressure but they somehow found the energy to level matters with a point apiece from a Rian Brady (free), their first score for 20 minutes, and a truly terrific strike from Joseph Hagan from near the sideline in the 66th minute.

A draw and extra-time was a strong possibility but Laois went back in front from a free converted by Gary Walsh in the 70th minute and clinched a very hard earned victory when substitute Sean O’Flynn shot over the bar in the eighth minute of additional time.