Home to Laois in the Leinster SFC quarter-final on Sunday, 1.30pm 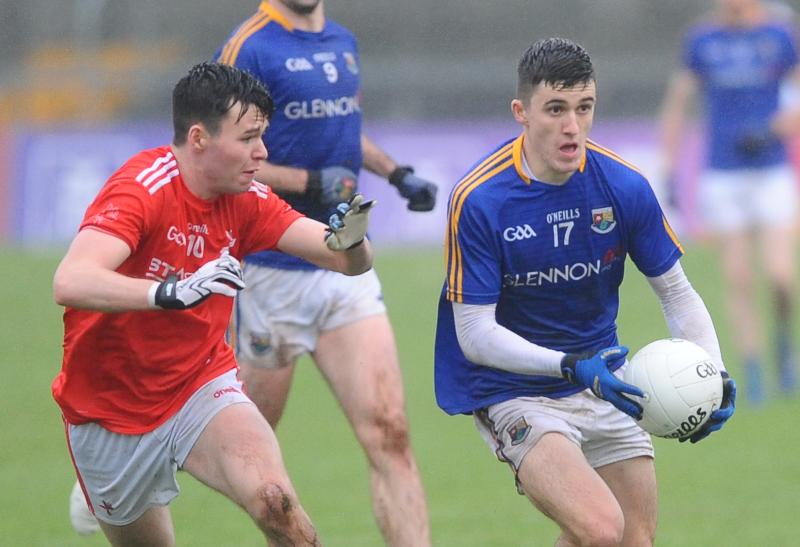 Iarla O'Sullivan pictured in action for Longford against Louth in the Leinster Senior Football Championship first round game at TEG Cusack Park in Mullingar on Sunday last Photo: Declan Gilmore

It was a real war of attrition in very testing conditions on a miserable wet day but hard working Longford stuck it out to score a slender win over Louth in the Leinster Senior Football Championship first round clash at TEG Cusack Park in Mullingar on Sunday last.

A draw and extra-time was looking the likely outcome when Louth star Sam Mulroy fired over the equalising point with time running out but Longford finished the stronger with the exceptional Darren Gallagher shooting over the bar in the 69th minute.

Possession was the name of the game in the tense and exciting finish to an otherwise very scrappy encounter and Longford held on to the ball before engineering a well worked move that yielded another point from substitute Robbie Smyth in the third minute of stoppage time.

That crucial score clinched a very hard earned win for Longford and their reward is a home game in the quarter-final with Laois coming to Glennon Brothers Pearse Park on Sunday.

Manager Padraic Davis will be delighted that his side managed to get across the line in the stamina sapping dreadful winter weather but the midlanders were almost undone by outstanding Louth attacker Mulroy who accounted for the losers entire tally of 1-7 with his first half goal and two of the points coming from play.

Gallagher scored the Longford goal in the early stages of the game (8th minute), after linking up with midfield partner Kevin Diffley, and just a solitary point separated the sides at the break with Louth trailing by 1-5 to 1-4.

A defining moment in the match materialised when Longford keeper Paddy Collum produced a vital point-blank save to keep out a goal attempt from Louth wing back Anthony Williams with five minutes gone in the second half and it was a tight contest from there until the finish.

There was just one change on the selected Longford team with Iarla O’Sullivan replacing his Rathcline colleague Oran Kenny and it was Louth who got the opening score when Sam Mulroy converted a free in the 3rd minute.

In a game of many missed chances and mistakes in the extremely difficult wet conditions, Longford got back on level terms with a cracking point from Liam Connerton in the 7th minute and moments later came the Gallagher goal.

Darren planted the ball in the back of the net from a few yards out after receiving the perfect pass from Kevin Diffley and when Rian Brady landed a fine point almost immediately it was looking good for Longford who led by 1-2 to 0-1.

But they failed to register another score for 22 minutes when Gallagher converted a well struck free near the sideline, at which stage Louth had battled their way right back into contention thanks to a goal from Mulroy.

The big full-forward burst his way through to find the back of the net in the 27th minute with his shot clipping the post as the ball found a way past Paddy Collum.

With Mulroy also converting a couple of frees, Louth were leading by 1-3 to 1-2 and that Longford fade out will be causing considerable concern for Padraic Davis for the quick turnaround to face Laois in the second round of the championship this weekend.

A brace of points in quick succession from Gallagher, the second a terrific tight angled effort from play, put Longford back in front but they then wasted a couple of good chances to extend the advantage with shots from Liam Connerton and Colm P Smyth dropping into the safe arms of  the opposing keeper Craig Lynch.

Sam Mulroy (free) was on target again to level matters but just before the break a Louth mistake was punished with Daniel Mimnagh shooting over the bar to leave Longford ahead by the minimum of margins going into the second half.

Rian Brady kicked another gem of a  score early on the changeover before Paddy Collum came to the rescue with a very important save with Mulroy kicking over the resulting ‘45.

It might have been a different story had Louth scored a second goal, so close was this championship clash which felt so strange with no supporters in the ground in compliance with the current Covid-19 restrictions.

The sides were all square again when the mighty Mulroy landed a brilliant point from play in the 52nd minute and the pressure was firmly on Longford.

Having said that, a goal chance was created soon after when a dipping shot from Daniel Mimnagh was parried by the Louth keeper.

Longford went back in front when impact replacement Robbie Smyth did very well to win possession for a mark in front of the posts and slotted the ball over the bar in the 59th minute.

There was another goal opportunity for Longford in the 63rd minute with a flick from Donal McElligott drifting just wide of the post but back came Louth to level again with who else but Sam Mulroy shooting over the bar.

That was really putting it up to Longford but they refused to panic with the late points from Darren Gallagher and Robbie Smyth making sure of the victory.

Great credit to Darren Gallagher for battling through the second half with a dead leg injury and while the Granard man made a major influence once again for the county, and particularly so in the first half, the compact defence also deserve a lot of praise for the very determined manner in which they kept the rest of the Louth attack scoreless.