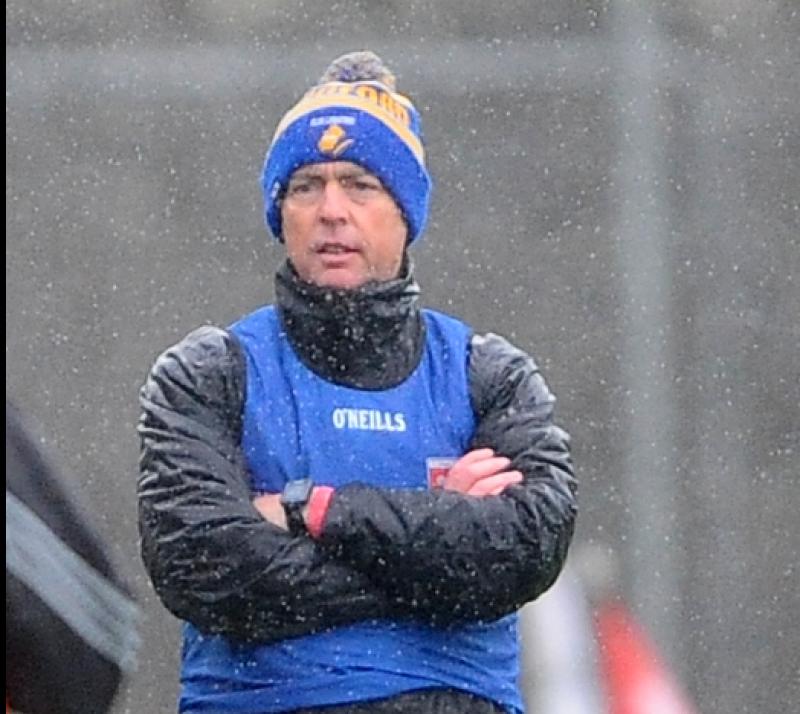 Longford manager Padraic Davis pictured during the course of the Leinster SFC first round game against Louth at a wet TEG Cusack Park in Mullingar on Sunday last Photo: Declan Gilmore

Longford manager Padraic Davis said he was fearful ahead of their game with Louth. In the last number of competitive meetings, Longford have enjoyed a  good record against the Wee County. That continued again on Sunday last when they registered a two point win in the first round  of the Leinster championship.

Davis said: “Thankfully it was us that came out on the right side. The fear is that the  pattern of winning against Louth is going to change and fortunately it hasn’t.

“There was never going to be anything more in it than a kick of the ball. To be fair to the lads their last 15 minutes was their best. It was a section of the game that they really performed and dug in. Obviously we got the couple of scores at the end that made the difference.”

Darren Gallagher was once again excellent for Longford, scoring 1-3. The Granard man suffered a dead leg in the first half but fortunately for Longford he was able to finish out the game and put them back in front in the 69th minute with a great point.

The Longford boss said: “Darren Gallagher was tremendous, very much so in the first half. We were depending on him almost too much and it was a case that we were going to wear him out.

“We picked it up in that middle third and we had so many more options. Thankfully Gally came out for the second half and continued to play a prominent part.”

Despite the dreadful weather conditions Longford didn’t alter their style of play. Davis admitted that being able to introduce Robbie Smyth was important for his side. The Abbeylara man scored two vital points.

“No we didn’t change our style of play. It wasn’t a case that we could. The introduction of Robbie Smyth gave us a presence. Robbie is quality but more importantly he is a big game player. That is something you are born with.

“It was all about the timing of the introduction, there is not 75 minutes in him, right now. In the end his contribution has probably decided who goes home the happiest.”

Another person that put in a terrific shift for Longford was full-back Andrew Farrell who was marking the superb Sam Mulroy.

“Andrew Farrell was arguably our best player and has arguably been our player of the year. I’m delighted for him.

“He won’t be happy with the goal but I think his performance, that aside, was flawless. The tally Sam Mulroy got was no reflection on Andrew’s overall performance,” said Davis.

Longford waited nearly four months for this championship game to be played and Davis is delighted football is back.

“It’s great to be back. It’s an unfortunate situation; some people agree with it, some don’t. We are in this situation. We will do our best to adhere to every single guideline and restriction that is in place.

“The performance from that point of view from backroom staff, players, county board and everybody has been brilliant and we are now looking forward to the next round against Laois on Sunday with the plus of home advantage.”