Longford ladies back in championship action against Louth

TG4 All-Ireland Intermediate Round 2 game in Clones on Sunday 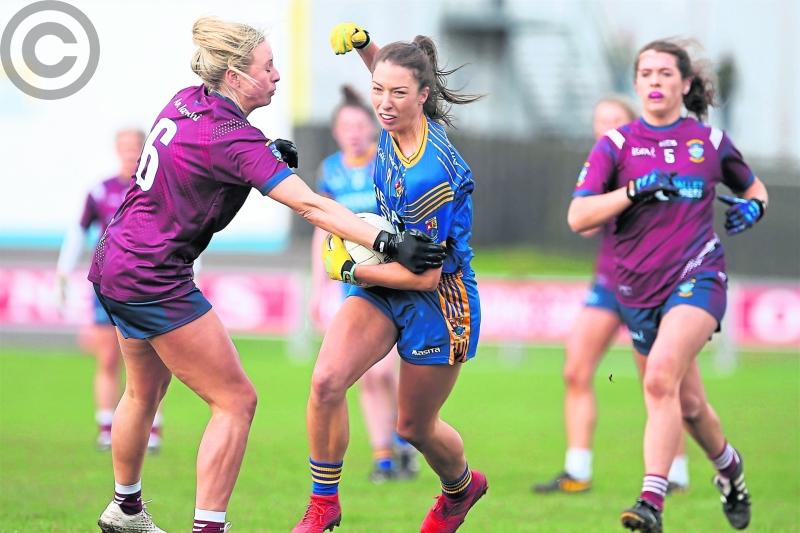 Aisling O'Hara pictured in action for Longford against Westmeath in the Ladies Football All-Ireland Intermediate Championship Round 1 game at the Mullahoran grounds on Saturday last Picture: Syl Healy

On Saturday last a far stronger Westmeath ladies team defeated Longford ladies in the first round of the 2020 TG4 All-Ireland Intermediate football championship by a 24 point winning margin. As the saying goes, goals win games and Westmeath scored nine in total, five in the first half and four in the second half.

Enda Sheridan's charges must now re-group and get ready for their remaining game in the Intermediate championship group stages which is against Louth on Sunday next in Clones, throw-in 1pm The winners from this group (almost certainly Westmeath) will advance to the All-Ireland semi-finals which will take place on the weekend of the 28th/29th November next.

The more experienced Westmeath girls really put it up to Longford straight from the throw-in with the Longford defence under constant pressure throughout this championship game.

Going in at half-time Westmeath were up by twelve points and with a gale force wind blowing in Mullahoran GAA grounds it really looked at this point that it was going to be a real uphill battle for this young Longford team to get back into this championship game.

Longford scores in the first half came from Michelle Farrell, a goal from play, a point from play by Kara Shannon and three frees from Aoife Darcy.

The second half continued just like the first half with Westmeath winning all the battles in most positions on the field. To Longford's credit they did pull back the Westmeath lead to six points at one stage of the second half but the Westmeath girls went on to score a further four goals and five points to Longford’s second half tally of just 1-2.

Longford’s second half goal was a fine effort from the boot of midfielder Grace Shannon from twenty-five yards out with Longford captain Michelle Farrell scoring further two points from play. Westmeath went on to win this rather one sided game by a wide margin. Final score from Mullahoran: Westmeath 9-9 Longford 2-6.

All Longford LGFA followers please note that the second round TG4 All-Ireland Championship game Longford v Louth will be available to watch LIVE and FREE of charge on the LGFA Facebook page on Sunday next. Details of the link will be on Longford Ladies Facebook page.