Longford finish the stronger for slender win over Louth

Home to Laois in Leinster SFC quarter-final on Sunday next 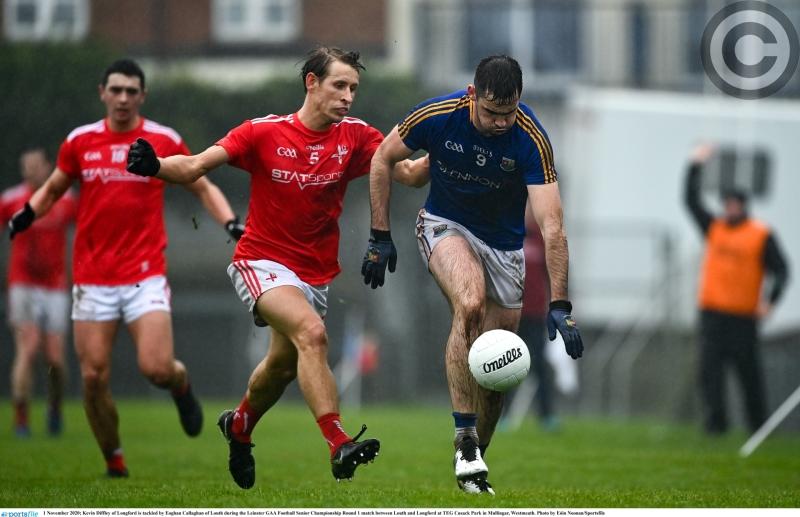 Kevin Diffley on the ball for Longford in his bid to evade the challenge of Louth opponent Anthony Williams. Action from the Leinster SFC first round game in Mullingar Photo: Eóin Noonan/Sportsfile

It was a real war of attrition in very testing conditions on a miserable wet day but hard working Longford stuck it out to score a slender win over Louth in the Leinster Senior Football Championship first round clash at TEG Cusack Park in Mullingar on Sunday.

A draw and extra-time was looking the likely outcome when Louth star Sam Mulroy fired over the equalising point with time running out but Longford finished the stronger with the exceptional Darren Gallagher shooting over the bar in the 69th minute.

Possession was the name of the game in the tense and exciting finish to an otherwise very scrappy encounter and Longford held on to the ball before engineering a well worked move that yielded another point from substitute Robbie Smyth in the third minute of stoppage time.

That crucial score clinched a very hard earned win for Longford and their reward is a home game in the quarter-final with Laois coming to Glennon Brothers Pearse Park on Sunday next.

Manager Padraic Davis will be delighted that his side managed to get across the line in the stamina sapping winter weather but the midlanders were almost undone by outstanding Louth attacker Mulroy who accounted for the losers entire tally of 1-7 with his first half goal and two of the points coming from play.

The powerful Gallagher scored the Longford goal in the early stages of the game (8th minute), after linking up with midfield partner Kevin Diffley, and just a solitary point separated the sides at the break with Louth trailing by 1-5 to 1-4.

A defining moment in the match materialised when Longford keeper Paddy Collum produced a vital point-blank save to keep out a goal attempt from Louth wing back Anthony Williams with five minutes gone in the second half and it was a tight contest from there until the finish.