Behind closed doors championship clash against Louth in Mullingar on Sunday 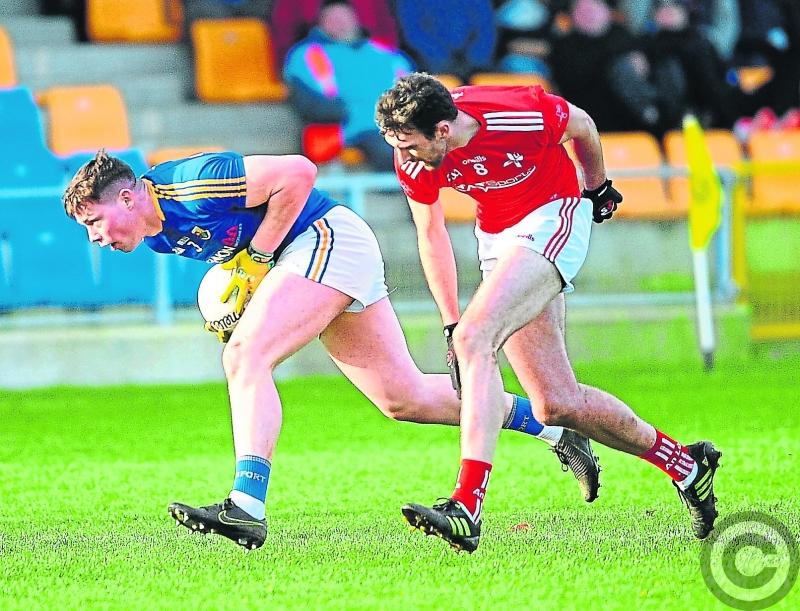 Longford defender Andrew Farrell on the ball in evading the challenge of Louth opponent James Califf. Action from the 2020 NFL Division 3 clash at Pearse Park back at the end of January Pic: D Gilmore

A good season for the Longford senior footballers will get even better if they manage to beat Louth in the Leinster Championship first round game at TEG Cusack Park in Mullingar this Sunday, throw 1.30pm.

Padraic Davis may be wary of a wounded Louth side, hurting badly from a  poor National League campaign that ended in relegation to Division 4, but the Longford manager must be in a fairly confident frame of mind.

There appears to be problems in the Louth camp at the moment and a big blow is the absence of Declan Byrne, Ciaran Byrne and Ciaran Downey from the squad on the recent return to competitive inter-county action for the first time in over seven months due to the Covid-19 pandemic

When you add the names of Jim McEneaney, Derek Maguire and Andy McDonnell to the list of missing players it must be said that Louth are currently deprived of considerable quality.

While the pressure has been mounting on their manager Wayne Kierans,  he received a boost when revitalised Louth scored a  surprise  home win over the already promoted Down who fielded a weakened team at the Dowdallshill grounds in the final round of the league on Sunday last.

The season is generally judged on the championship result and the Louth players will be looking at the game against Longford as a decent opportunity to redeem themselves.

Thus Longford are well warned as to what might happen behind closed doors at the Mullingar venue on Sunday and there is no room whatsoever for a complacent attitude going into the biggest game of the year.

Just the narrow margin of three points (0-16 to 1-10) separated the sides when Louth lost to Longford in Round 1 of the National League back at the end of January.

Captained by Bevan Duffy, one would expect Louth to produce a highly charged performance in a determined bid to salvage something significant from the season.

Tommy Durnin is a powerful midfielder who could prove difficult to contain and his battle against Longford’s most influential player Darren Gallagher is probably going to be a vital factor in the eventual outcome.

The main man in the Louth attack is unquestionably the accurate full-forward Sam Mulroy who fired over eleven points (all frees) in the demoralising 5-19 to 0-16 hammering against Cork in the recent Division 3 fixture at Páirc Uí Chaoimh.

Corner-forward Ryan Burns is another threat up front but he did not feature in the  emphatic 3-14 to 0-16 win in the meaningless fixture against much understrength Down due to injury.

While the Wee County have produced some surprise results in the championship in recent years the general opinion is that Longford are looking good to make further progress in Leinster.

Should Darren Gallagher make his usual big impact at centrefield, that will provide the platform for the sharp attack with the ammunition to shoot the crucial scores.

The welcome return of Robbie Smyth and Larry Moran to the Longford panel has certainly strengthened the forward department in giving the management team some more options up front.

With the exception of the disappointing defeat against Derry at Celtic Park a couple of weeks ago, the midlanders performed consistently well in the National League this season but the current absence of the unavailable Michael Quinn is clearly a setback.

The driving force of Quinn will be sorely missed but Longford should still be good enough to cross the first hurdle and the major reward is a home quarter-final against Laois the following week.

The boost of the O’Byrne Cup triumph carried a fair amount of momentum into the league campaign as the Division 3 status was secured before the initial coronavirus lockdown, a fine haul of seven points from five fixtures.

Padraic Davis will be hoping for a repeat of that early season form in the match that really matters against Louth and few can argue with the fact that Longford are fancied to advance to the next round of the Leinster championship.