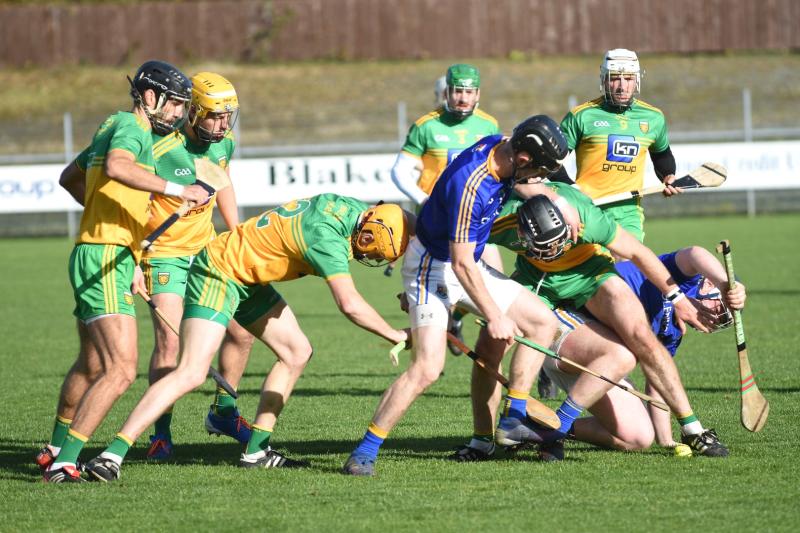 A midfield tussle for possession in the Donegal v Longford game in Letterkenny Picture: Geraldine Diver

A couple of crucial goals in the second half swung the issue in favour of Donegal but Longford will get another chance to keep their championship hopes alive through the back door.

The early exchanges were pretty even as the two teams struggled with their first touch after a seven month lay-off.  And the sides were level at 0-2 each when the referee called the first half water break after 15 minutes.

Luke Kelly, the Longford wing forward, landed the first score on five minutes. Donegal had to wait until the seventh minute for their first score. Declan Coulter knocked over a peach of a point from way out on the left wing under the stand to tie up the game before Bernard Lafferty and Joe O’Brien traded points.

Donegal pulled away in the second quarter with Lafferty, Coulter, Jack O’Loughlin and Ronan McDermott all knocking over points to leave their side 0-11 to 0-5 ahead at the break. Ian Campbell and Iomar Creaven added to the Longford tally.

The midlanders, with the stiff breeze in their backs, took the fight to Donegal on the changeover. And with Alan Ward, Luke Kelly and Joe O’Brien finding the target it was a two point game at the second water break.  Donegal, who failed to register a score in the third quarter, led by 0-11 to 0-9.

Donegal did inject a little more urgency in their play at the start of the final quarter. Ritchie Ryan, a second half replacement for the injured Declan Coulter, pounced for the all important goal that turned the game in favour of the home side.

Ryan showed great alertness when he flicked a Ciaran Mathewson strike that came back off the crossbar to the back of the Longford net.

Donegal were five up again, 1-11 to 0-9. That was on 51 minutes but gutsy Longford refused to roll over and the margin was back to two with the clock ticking down.

Points from Daniel Connell, Iomar Creaven and Alan Ward reduced the Donegal lead before Ronan McDermott stole in behind the defence to rattle the Longford net for a second time in a severe setback for Derek Frehill's side.

Donegal were five in front once more, 2-12 to 0-13. But in a frantic four minutes of injury time Longford danger man Joe O’Brien hit 1-1 to close the gap to the minimum before Ciaran Mathewson settled it with a point from a close range free.