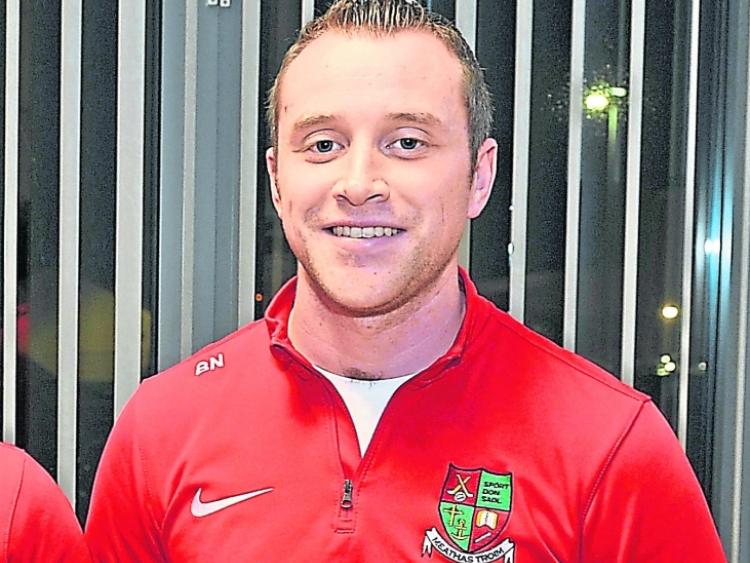 Mostrim clubman Brian Noonan, the joint manager of the Longford U-17 football squad along with Granard's Vinny Nally

After months of uncertainty Longford U-17s are ready and raring to go for their Leinster Minor Football Championship first round game against Wicklow in Aughrim this Saturday, throw-in 3.30pm.

Mostrim clubman Brian Noonan is the joint manager alongside Granard’s Vinny Nally and he said that everyone is looking forward to the game.

“We cannot wait to get going. We started last December in the gym and we were all systems go until the lockdown in March.

“We had one competitive game played in the Leinster League and a handful of challenges and then it was pulled due to the Covid-19 outbreak.

“We managed to keep it going. When we saw the club come back we were optimistic and when I heard we could finally get back training I didn’t believe it until we actually trained,” stated Brian.

Longford’s preparation for the championship clash against Wicklow was disrupted with a directive from the GAA that Minor teams could not play challenge matches. Longford had lined up a game with Roscommon for last Friday evening (October 9th).

Noonan said: “There’s curve balls coming at you from all angles. We had a challenge with Roscommon in place and we were really looking forward to that because we had everyone available. I know there are other counties in the same boat.”

Looking ahead to the Wicklow game, the primary school teacher was unable to do proper homework on the Garden County. He is aware of the threat they pose having come up against them over the last couple of years.

“It’s hard enough to find any information about them because there has been so little minor football played this year.

Wickow were impressive last year, moved the ball well and were a good side. On paper people are going to look at it and think it’s a favourable draw for us but at minor level anything can happen.”

There are some positives to the break due to Covid for Longford as some players were able to recover from serious injuries.

“When Covid hit first we would have had a few injuries but unfortunately long term casualty Matthew Flynn is still sidelined as he recovers from a shoulder operation in the summer.

“A few lads opted to pull away and focused on their club commitments. The break in the Covid delayed season gave people a bit more time to think and a few lads thought that it wasn’t for them.

“We have added a few players to the panel in the last few weeks based on their performances in club matches,” commented Noonan.

Although without Matthew Flynn (Clonguish), Longford have the strongest possible panel available to their management team.

Noonan said:  “We are very well balanced. We have no one man that is running the show. We have good players all over the field.

“We have Oisin O’Toole (Dromard) at full-back. We have loads of options around the middle; Ben Lynn (Slashers), Dylan Lynch (Sean Connolly’s), Ruairi Corcoran (Granard) and Harvey Myhill (Rathcline).

Micheal Hynes (Granard) has the ability to play a vital role in attack along with Emmet Brady (Mullinalaghta) who is a carbon copy of his older brother Rian.”

A lot of the panel have played post primary schools football at a high level and this has helped them according to Noonan.

“It does help when the boys are performing at a high level. They are improving all the time and putting themselves up against stronger players.

“With minor moving to U-17 we are working with a young panel with Emmet Brady, Ronan Courtney (Mostrim) and Matt Duffy (Dromard) all U-16s.

“We will be hoping for a win over Wicklow in our bid to make further progress with a quarter-final meeting with Offaly the reward if we do succeed in crossing the first hurdle,” concluded the fairly confident Longford mentor.