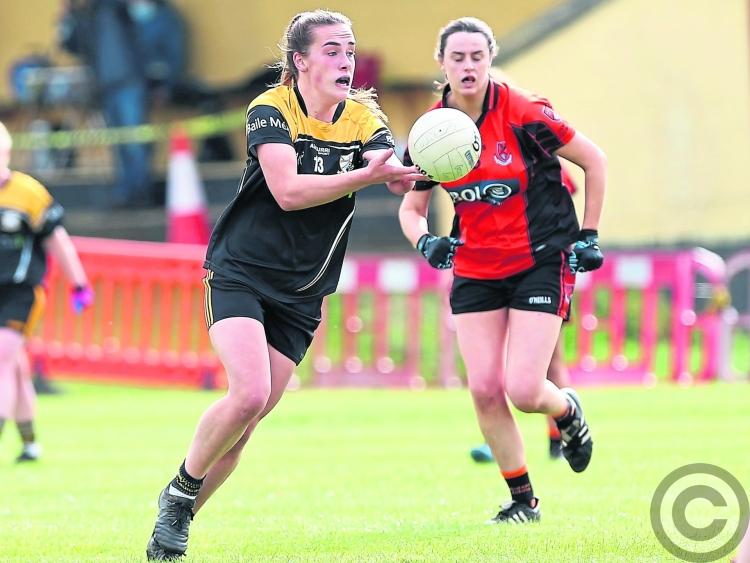 The Longford Intermediate champions were ahead by two at the break (0-12 to 0-10) but took complete control in the second half, scoring three goals as they won by the wide margin of eleven points in the finish.

So many players performed their part in this win in what was an excellent game of football and Ballymore, managed by Longford Slashers clubman Sean Meenaghan, can now look forward in a confident frame of mind to the provincial title decider against the Wexford Intermediate champions Kilmore.

The second half goals were scored by Emer Heaney, Aoife Dawson and Alanna Burns.

The opening quarter was end to end stuff with Ballymore getting the first score of the game seconds after the throw-in; Aoife Dawson with the point.

Emer Heaney hit over a great point before Fiona Getting hit over a lovely point to give Ballymore an early three point lead.

Niamh Sweeney got Ballinteer’s first point in the fourth minute but that was cancelled out by a neat Gettings point. Ballinteer cut the gap to just one point in the eighth minute but points from Heaney and Dawson saw Ballymore restore their three point lead by the ninth minute.

Ballymore were ahead by six in the 23rd minute after some good play but Ballinteer came back at them and were just one point behind in the 30th minute when Orlagh Nolan fired over a free. The Dublin side did try to score a goal in their dominant period but Ballymore defended so well.

In first half stoppage time Emer Heaney got a point to give Ballymore a 0-12 to 0-10 point lead going in at the break. In the first three minutes of the second half Ballymore opened up a seven point lead with Fiona Gettings and Aoife Dawson hitting over fine points before Emer Heaney scored a fantastic individual goal.

Nolan hit over a free for Ballinteer while down the other end Fiona Gettings hit the post with her effort. Ballinteer fired over two points but Ballymore replied with a pointed free from Ashling Reynolds and an excellent goal from Aoife Dawson to put them ahead by eight points by the 40th minute.

Ballinteer lost their keeper in the 43rd minute through injury with Roísín Kiernan going into goals. Ballymore were clinical. Great play between Ashling Reynolds and Emer Heaney saw Reynolds hit over a fabulous point in the 47th minute.

Gettings and Heaney then hit over fine points as the Longford side opened up an 11 point lead by the 50th minute. The game was all but over one minute later when Alanna Burns scored Ballymore’s third goal with a powerful finish. The lead was now 14 points.

Emer Heaney scored the final point of the game in what was a terrific victory for Ballymore.