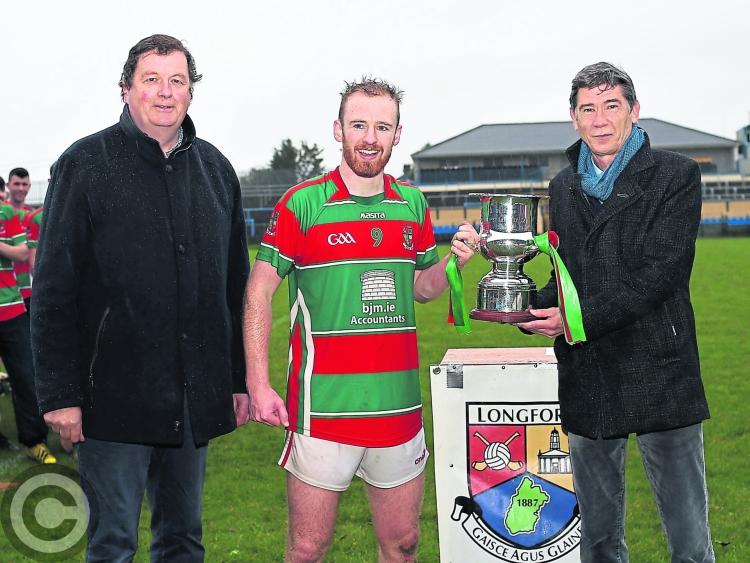 A jubilant Wolfe Tones captain Aidan Sheridan heaped praise on his side as the Mostrim club won their  seventh Senior hurling title in eight years and their 20th triumph in total after beating Longford Slashers 3-10 to 1-6 in the county final at Glennon Brothers Pearse Park on Sunday last.

Last year’s defeat to Slashers in the group stage that knocked Wolfe Tones out of the championship was something that spurred them on this year.

“Last year we were very disappointed when we didn’t make the final. We are not used to it and it’s not being cocky. We want to be here on the big day. It was definitely a driving factor for us this year.

“It’s been a difficult year, as everyone knows, but we kept training throughout, as much as we could do. I was looking forward to this day. It was a tough day for hurling, we didn’t start off great but I’m very proud of the boys there.”

Wolfe Tones trailed at the break by two points but put in a strong second half performance to outscore Slashers 3-5 to 0-2.

Their captain said: “Sometimes that’s the winning of the game; getting that good start. There are boys on that team who are playing for a long time and they know how to win and it’s them boys that you look to on days like this.

“We didn’t make it easy for ourselves but we had faith; two points down at the break and we knew we weren’t playing as well as we could do but we knew we had it in us. All we said at half-time was “no regrets”.

“I think it was testament to the work that the boys put in. Evan (Tully) is an example, he is working up in Dublin every day. He told me he puts in over 1,000 miles a week, he never missed a training session this year.

“On days like that, that’s where the striking comes in. It’s the simple things that come out when you are training hard like that.”

The biggest cheer of the game came in the 60th minute when Paddy Cullen came on for Martin Coyle. Two great servants for the club.

“I’m looking at Martin playing when I was growing up, the young lads here on the sideline, Martin will never let you down; never pull out of a ball. It’s for him we are winning these days.”

And of Paddy Cullen: “Paddy is another man. He is so involved in the club. It’s not just our club, there’s lads that are keeping hurling going in this county.

“It’s for them that these days are so important. People might say there’s only three clubs, we are struggling for numbers.

“It is testament to the crowd that we had here today and the excitement. I’m very proud of hurling in general and in my club,” stated the delighted Sheridan.