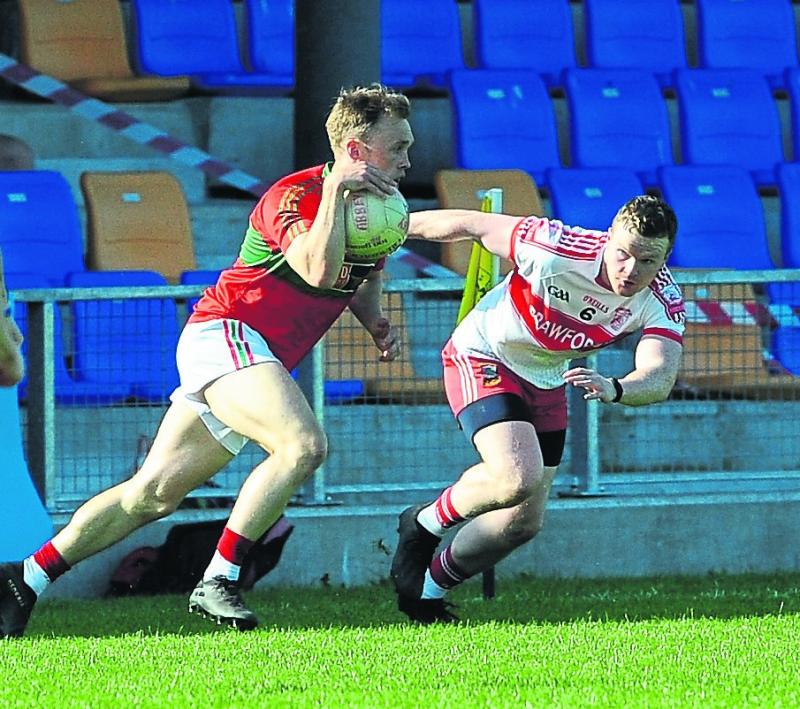 Cillian Lynn on the attack for Mostrim in his bid to evade the challenge of Abbeylara defender Michael McHugh. Action from the SFC quarter-final on Sunday September 20 Picture: Declan Gilmore

The decision by the GAA Management Committee this week to suspend all club games ​at all levels with immediate effect ​and until further notice means that the Longford Senior Football Championship will be deferred yet again.

The battle for the Connolly Cup, which began on the second weekend in August, was delayed due to the Killoe 48 weeks suspension saga and no sooner was that controversial case resolved by the DRA in favour of the reigning champions along came a very serious setback in the shape of the recurring dreaded coronavirus.

The escalating Covid concerns and some positive cases forced the postponement of both semi-finals on Sunday 27 September.

That put the pressure on the county board to complete the championship as quickly as possible in light of Longford’s return to competitive action in the NFL Round 6 game against Derry at Celtic Park on Saturday week, October 17.

Both Peter Hanley Motors SFC semi-finals were due to be floodlit affairs and had been fixed to be played last night (Tuesday).

Killoe were due to face Mostrim in Allen Park, Newtownforbes and Monaduff, Drumlish was to be the venue for the other senior semi-final involving Longford Slashers and Mullinalaghta.

The final was scheduled for next Sunday, October 11, and was due to be broadcast live on TG4 - a missed opportunity to showcase the biggest club game of the year in the county.

The 2020 SFC championship will eventually come to a conclusion when the season is over for the county senior football team so Killoe, Mostrim, Mullinalaghta and Slashers are all on the waiting list for another few weeks.

Meanwhile, the Mulleady Group Intermediate Football Championship title decider between Ardagh Moydow and St Brigid's Killashee, rescheduled for this Saturday October 10, has also been postponed. It is the second occasion for this final to be put on pause as 14 days earlier it was also due to be played but the fixture was called off owing to Covid-19 concerns.

And also gone until further notice is the Leinster Ladies Football Junior Club Final between the Longford Intermediate champions Ballymore and Wexford opponents Kilmore which was due to be played this Saturday, October 10 but is now postponed after the LGFA endorsed the decision made by the GAA’s Management Committee.

You would have to question the wisdom of the GAA hierarchy to recommence the 2020 inter-county season, so badly hit by Covid-19, but Longford and the other counties have to get on with it despite the mounting health fears all over the country during these very difficult times.

The following is the GAA statement released on Monday to suspend all club games:

"The decision has been taken in the interest of public safety following a number of incidents that have been brought to our attention in recent days. ​In particular, post-match celebrations and a lack of social distancing at certain events have proved disappointing and problematic.

"This directive applies to all ages and all grades across the island.

​"Training will continue to be permitted as per the guidelines outlined for the relevant levels in the Government's National Framework for Living with Covid-19 and relevant guidelines in the Six Counties.

"The GAA will continue to monitor the situation in the ​coming days and weeks, regarding changes in government guidelines, before liaising with our units accordingly.

"The Association would also like to acknowledge all of those units who have worked diligently in complying with the public health advice around the staging of our games and training sessions since activity resumed.

"More than ever, we ask that you continue with this approach where training sessions for your players is continuing."