Longford SFC: 200 supporters allowed to attend each of the remaining quarter-finals

Killoe v Granard and Abbeylara v Mostrim on Sunday next 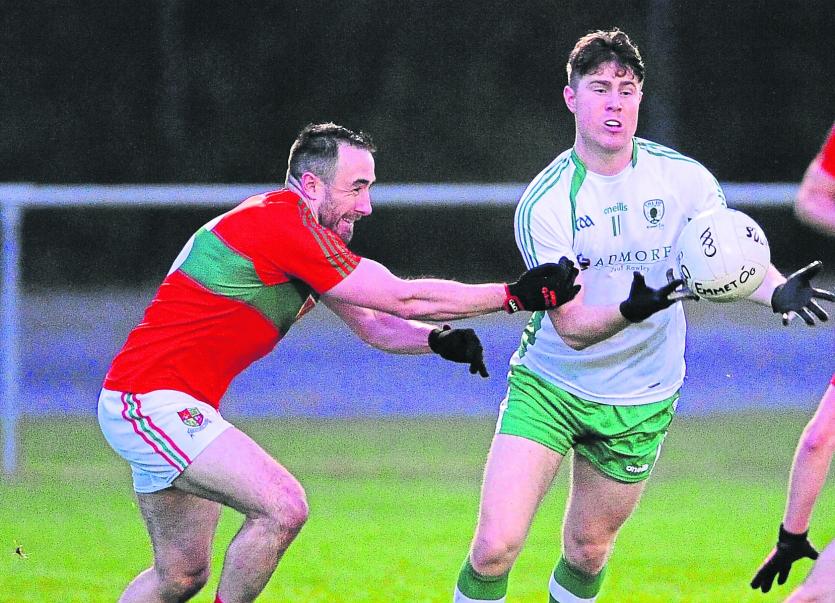 Larry Moran on the ball for Killoe in his bid to evade the challenge of Mostrim defender Shane Kiernan. Action from the SFC Group 2 game at Monaduff on Friday night last Picture: Declan Gilmore

Following a strange period of ‘behind closed doors’ fixtures in the Peter Hanley Motors Longford Senior Football Championship comes the good news that spectators will be allowed attend the games once again under the 'Living with Covid-19’ programme announced by the government on Tuesday.

Under the programme, crowds of 200 people will be permitted to attend sporting events where the capacity of a stadium exceeds 5,000 and as Glennon Brothers Pearse Park falls into that category some supporters from the participating clubs will be present at the remaining SFC quarter-finals on Sunday.

First up is the meeting of Killoe and Granard (throw-in 1pm), followed by the clash of Abbeylara and Mostrim (throw-in 4pm), and 200 spectators will gain admission to each of the quarter-finals for those fortunate enough to get a ticket.

Abbeylara and Killoe look good to reach the last four

With Longford Slashers and Mullinalaghta St Columba’s already through to clash in the senior semi-final on Saturday week, the other half of the delayed county championship finally got going again.

The Killoe 48 weeks suspension saga was eventually resolved with the DRA declaring the severe sentence null and void and thus Emmet Og were back in action against Mostrim in the remaining Group 2 fixture at the Monaduff grounds in Drumlish on Friday night last.

Although they lost by a point, the narrow defeat was good enough for the Edgeworthstown side to make further progress on scores difference with Clonguish losing out.

The reward for Mostrim is a quarter-final meeting against near neighbours Abbeylara at Glennon Brothers Pearse Park on Sunday next.

Under the guidance of their vastly experienced manager Dessie Dolan, Mostrim will be quietly confident of causing an upset and will be depending on Brian Farrell and Darragh Doherty for the vital scores.

While Abbeylara will be very wary after suffering a surprise defeat against Granard in the group stage, they were a lot sharper in the subsequent win over Dromard and are looking good to reach the last four.

Mickey Harkin is working with a well balanced side who  continue to be Connolly Cup contenders and could prove difficult to beat in the quest for championship glory.

St Mary’s were impressive in beating Abbeylara by the comfortable margin of six points and their powerful midfielder Darren Gallagher will take some stopping in the other quarter-final at Glennon Brothers Pearse Park on Sunday.

Providing the opposition are Killoe and while they can take absolutely nothing for granted against improving Granard, the title holders should prove too strong in their fierce desire to retain the Connolly Cup with their greater scoring power likely to prove a decisive factor.

The winners will meet in the semi-final the following weekend