Clonguish crash out of the championship on scores difference 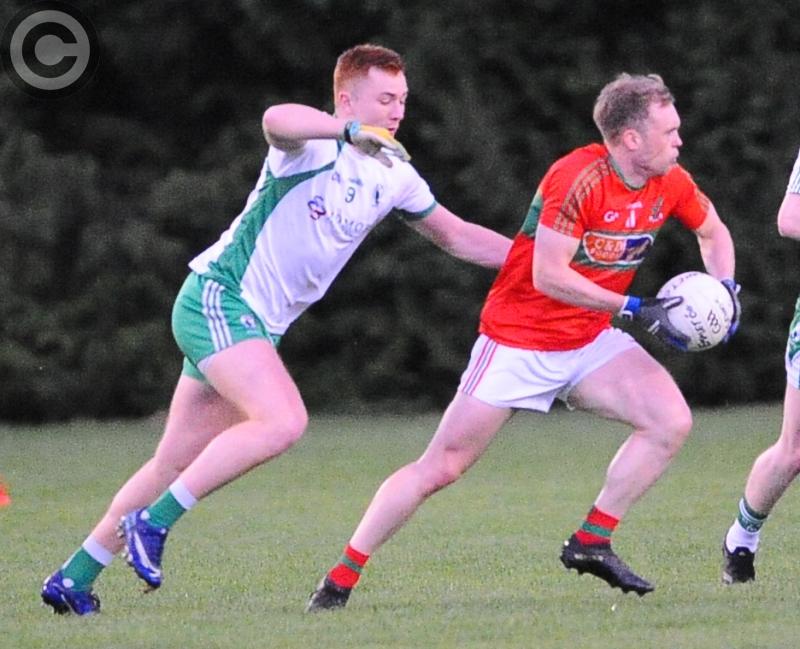 Cillian Lynn on the attack for Mostrim in his bid to break away from Killoe opponent Ryan Moffett. Action from the SFC Group 2 clash at Monaduff on Friday night Picture: Declan Gilmore

While Killoe were under no pressure with their place in the quarter-finals already secured, there was a lot at stake for Mostrim but they got the result they required to reach the last eight of the Senior Football Championship.

Seven points behind in the early stages of the second half in the remaining Group 2 fixture at the Monaduff grounds in Drumlish on Friday night, the tension was mounting for Mostrim but they battled back to close the gap to just the minimum of margins in the finish.

Dessie Dolan’s side now move on to meet Abbeylara in the quarter-final despite the narrow  defeat against Emmet Og but Clonguish crash out of the championship on scores difference.

The highlight of the game was the magnificent goal scored by Daniel Mimnagh who burst his way through to plant an unstoppable shot into the back of the Mostrim net with 20 minutes gone in the first half.

Killoe extended their advantage with a second goal from a penalty converted by Mark Hughes in the 28th minute to hold a comfortable 2-6 to 0-6 lead at the break and the title holders went seven up when Larry Moran fired over a cracking point in the early stages of the second half.

But Emmet Og gradually faded out of the game and Mostrim showed a lot of character to outscore the county champions 0-8 to 0-2 during the remainder of the match with Brian Farrell shooting five points (four frees).

The winners will meet in the semi-final