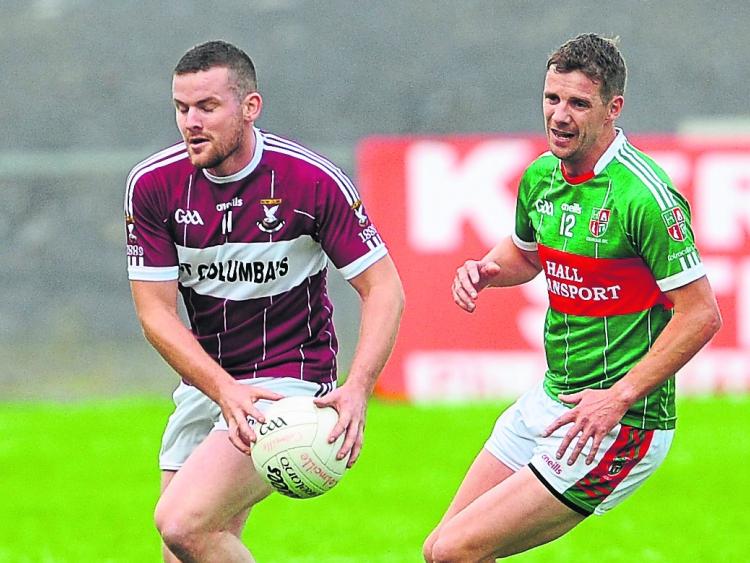 James McGivney on the ball for Mullinalaghta St Columba's in breaking away from Colmcille opponent Noel Farrell. Action from the SFC quarter-final on Sunday evening last Pic: Declan Gilmore

There must be a great sense of freedom out in the parish of Killoe this week with their footballers no longer in lockdown following the decision of the DRA (Disputes Resolution Authority) to declare their severe 48 weeks suspension null and void.

The Tribunal deliberated since Friday night after dealing with the most controversial case and released it's comprehensive sixteen page decision on Sunday evening "concluding that the Longford Hearings Committee erred in deeming that the mandatory and draconian sanction under Rule 6.24(c) was applicable or appropriate."

Tormented by the turmoil of the ongoing suspension saga over the initial non-payment of a €750 fine imposed by Longford HC, the fall out from the unplayed 2019 U-16 ‘A’ Championship final back on January 5, the lifting of the ban has released the Emmet Og club from the chains of facing life without football for almost a year.

The DRA decision means that all Killoe teams from minor to senior grade are back in action with immediate effect, including county board officers, match officials and stewards.

The following is a statement released by Longford GAA on Monday evening:

"Longford GAA accept the written decision of the (DRA) Tribunal in the matter of the arbitration sought by Killoe Emmet Óg and which was delivered last night (Sunday).

"Longford GAA are delighted to see that Killoe Emmet Og can resume in our Championships and we look forward to the completion of same in a timely manner.”

Five weeks ago Emmet Og played their first round fixture in the 2020 Peter Hanley Motors senior football championship with a win against Clonguish.

With the 48 weeks suspension quashed by the DRA, Killoe can now resume the delayed defence of the county title in the remaining group fixture against Mostrim which is fixed for the Monaduff grounds in Drumlish this Friday night, throw-in 8pm.

St Mary’s Granard and Abbeylara have been waiting patiently to see who they will face in the quarter-finals and as soon as the Killoe v Mostrim game is over a draw will take place at the Monaduff grounds to determine who plays who.

Following their wins over Colmcille and Fr Manning Gaels respectively last weekend, Mullinalaghta and Longford Slashers will meet in the SFC semi-final in the 60th anniversary of the Connolly Cup.

Ironically it was Killoe who had the proud distinction of winning the coveted trophy for the first time back in 1960.

Ardagh Moydow and St Brigid’s Killashee will clash in the 2020 Mulleady Group Intermediate Football Championship title decider at the end of September.