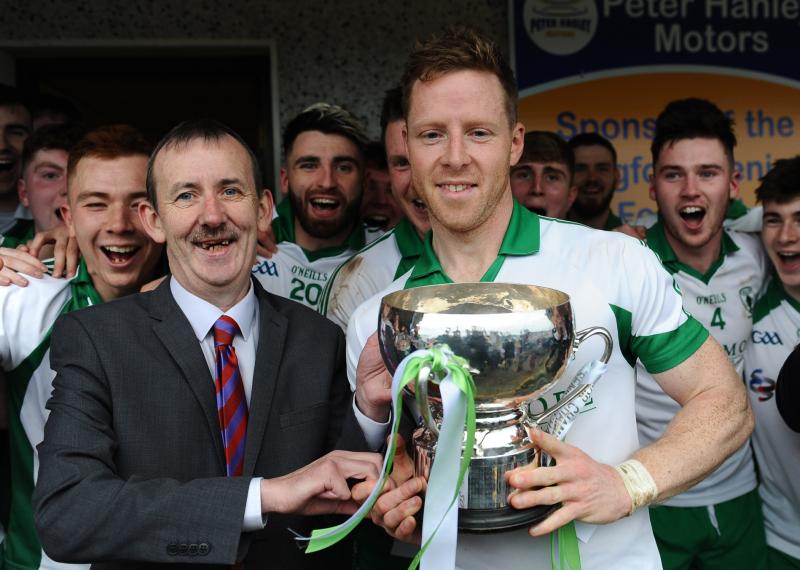 The Disputes Resolution Authority (DRA) are preparing to deal with the most controversial Killoe 48 weeks suspension and the case will be heard this Friday night (switched from Thursday) after the Emmet Og club lost their appeal to the Leinster GAA Hearings Committee last week.

Killoe are hoping that their appeal to the DRA to overturn the massive ban imposed on the club as a result of an unpaid fine for €750 will be successful and that the club will get to play their remaining fixture against Mostrim in the group stage of the Senior Football Championship as soon as possible.

Emmet Og were last in SFC action back on Friday August 7 when they beat Clonguish in a first round fixture at the Monaduff grounds in Drumlish.

Longford County Board decided to press ahead with the draw for the 2020  Senior Football Championship quarter-finals which took place at C&D Devine Park in Edgeworthstown on Sunday last following the Minor Football Championship semi-final between Longford Slashers and St Colmcille’s/St Francis. The title holders Slashers emerged victorious by a point in advancing to meet Clonbroney/Wolfe Tones Og (Sean Connolly's/Mostrim) in the U-18 decider.

For the second year in succession Colmcille and Mullinalaghta will meet in the last eight of the Senior Football Championship with St Columba’s given the opportunity to gain revenge for their shock defeat in 2019.

In the same half of the draw are last year’s beaten finalists Longford Slashers who take on Fr Manning Gaels.

Both quarter-finals to be played behind closed doors  are a repeat of the group stage fixtures and the winners will meet in the semi-final.

Mullinalaghta will be very wary of Colmcille after what happened at this same stage last year and will head to Glennon Brothers Pearse Park on Sunday evening (throw-in 5.30pm) in a cautious frame of mind.

The neighbouring clubs also clashed in the group stage of this year’s championship with St Columba’s letting a commanding lead slip in their eventual draw with Eugene McCormack’s spirited side.

It is hard to envisage Mullinalaghta failing again and the title favourites are looking good to reach the last four.

On the evidence of their emphatic win over Fr Manning Gaels in the group stage, Longford Slashers will be fancied to confirm their superiority over last year’s Intermediate champions at Glennon Brothers Pearse Park on Sunday, throw-in 12.30pm

Having said that, the Drumlish/Ballinamuck outfit bounced back in tremendous fashion to beat Carrickedmond in the next round and are hoping that key forward Pauric Gill will have recovered from injury to make his first appearance in the 2020 Connolly Cup.

However, it is a bit more complicated in the top half of the draw as the pairings cannot be confirmed until Group 2 is sorted out and the teams involved are Killoe Emmet Og, Clonguish and Mostrim.

Nothing can happen here until the Killoe suspension is resolved and if and when the final group fixture between Emmet Og and Mostrim can be played.

St Mary’s Granard and Abbeylara are waiting in the wings to continue their championship campaign and when the two qualifiers are known then a separate draw will take place to determine who plays who!

In other words, Granard and Abbeylara will be in action against the eventual Group 2 qualifiers with the winners of those delayed games meeting in the other semi-final.