DRA to deal with Killoe suspension appeal this week 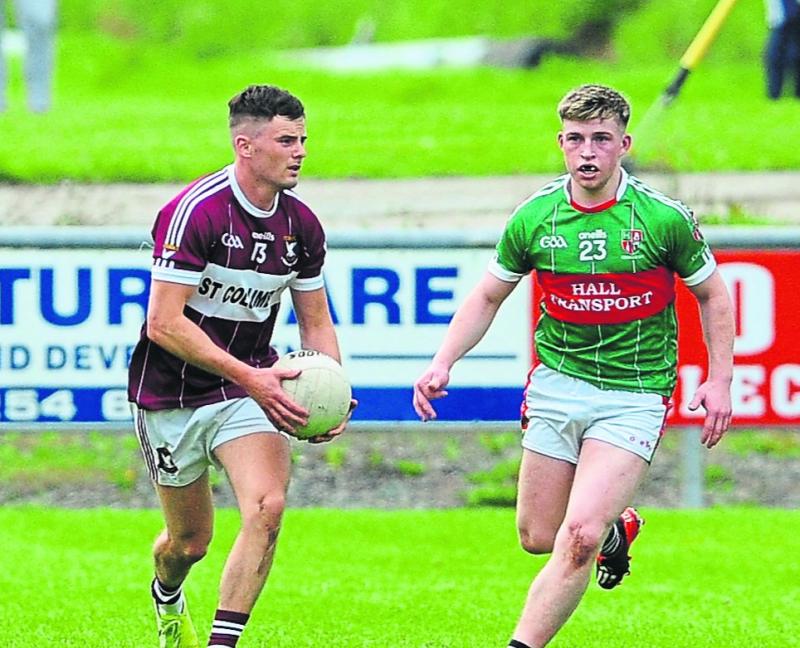 Rian Brady on the ball for Mullinalaghta in evading the challenge of Colmcille opponent Alan McKeon. Action from the recent SFC first round game which ended in a draw Picture: Declan Gilmore

As the Disputes Resolution Authority (DRA) prepare to deal with the most controversial Killoe 48 weeks suspension with the appeal will be heard this week (date to be confirmed), the County Board pressed ahead with the draw for the 2020 Peter Hanley Motors Senior Football Championship quarter-finals.

The draw took place in front of a most intrigued audience in the car park of C&D Devine Park in Edgeworthstown this Sunday following the Herterich Artisan Butchers Minor Football Championship semi-final which ended in a win for the title holders Longford Slashers who beat St Colmcille’s/St Francis, the Colmcille/Dromard/Ballymore amalgamation, 1-9 to 1-8, in a very tight contest.

For the second year in succession Colmcille and Mullinalaghta will clash in the last eight of the Longford Senior Football Championship with St Columba’s given the opportunity to gain revenge for their shock defeat in 2019.

In the same half of the draw are last year’s beaten finalists Longford Slashers who take on Fr Manning Gaels. Both quarter-finals are a repeat of the group stage fixtures and the winners will meet in the semi-final.

However, it is a bit more complicated in the top half of the draw as the pairings cannot be confirmed until Group 2 is sorted out and the teams involved are Killoe Emmet Og, Clonguish and Mostrim.

Nothing can happen here until the Killoe suspension is resolved and if and when the final group fixture between Killoe and Mostrim can be played.

St Mary’s Granard and Abbeylara are waiting in the wings to continue their championship campaign and when the two qualifiers are known then a separate draw will take place to determine who plays who!

In other words, Granard and Abbeylara will be in action against the eventual Group 2 qualifiers with the winners of those delayed games meeting in the other semi-final.