Longford SFC: Abbeylara are through to the quarter-finals after knocking Dromard out 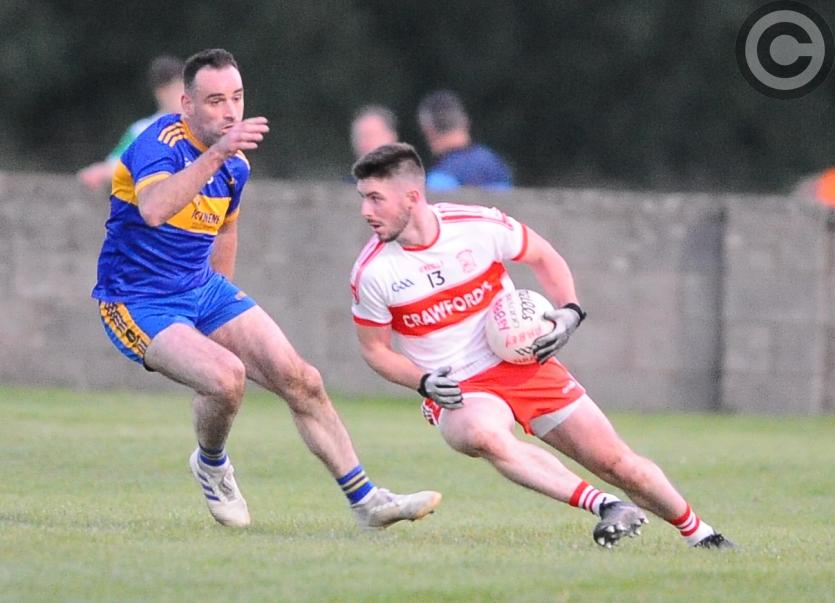 Robbie Smyth on the ball for Abbeylara in his bid to find a way past Dromard opponent Diarmuid Masterson. Action from the SFC Group 4 clash at Allen Park on Friday night Picture: Declan Gilmore

Abbeylara are through to the Senior Football Championship quarter-finals after withstanding a determined Dromard comeback in the crucial Group 4 clash at Allen Park, Newtownforbes on Friday night.

Just a solitary point (0-4 to 0-3) separated the sides when Diarmuid Masterson fired over a wonderful score in the 22nd minute but Abbeylara, with the advantage of the wind, completely dominated the remainder of the first half in a decisive period that led to Dromard’s downfall and their eventual exit from the Connolly Cup.

They went further ahead when Robbie Smyth shot over the bar in the opening minute of the second half but Dromard never gave up the fight in gradually closing the gap.

A black card for Shane Mahon saw Mickey Harkin’s side reduced to 14 players for a ten minute period but Dromard failed to capitalise on the extra man and were still five points adrift midway through the second half, 0-12 to 0-7.

Three scores in quick succession followed from Joseph Hagan, Ross McNerney and Francis McGee (free) to put Abbeylara under pressure as the deficit was reduced to just two points but a couple of well struck frees converted by substitute Nigel Rabbitt settled the issue in a tense finish.

Ronan McEntire kicked Dromard’s final score in the 58th minute but moments later he was sent-off after receiving a second yellow card in what was a significant setback with Abbeylara hanging on to a slender lead.