Carrick Sarsfields capture the Longford U-16 'B' Championship title 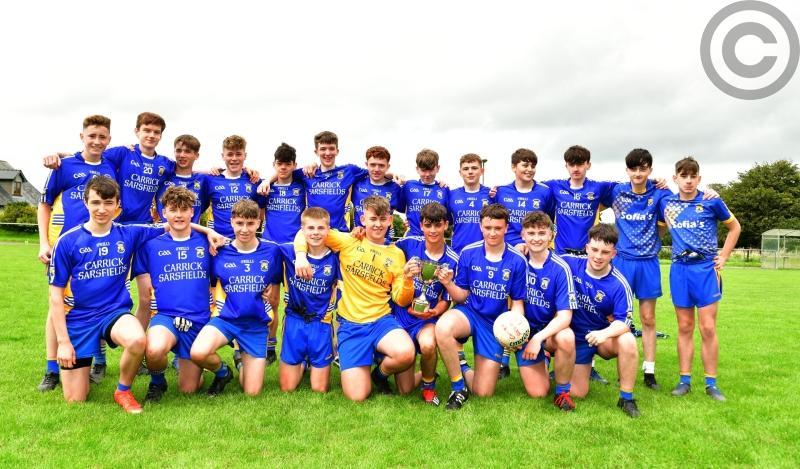 Carrick Sarsfields captured the first trophy of the Covid-19 delayed GAA season when they overcame Wolfe Tones Og in the Juvenile (U-16) ‘B’ Football Championship Final at Keenan Park, Ardagh on Sunday last.

The Carrickedmond/Legan amalgamation fought hard for a convincing win to take the U-16 title in windy conditions.

This game had a bit more atmosphere than the senior games played at the weekend as one parent was allowed to attend per child.

There was a final buzz around the place and this brought back some sort of normality to the two sets of U-16 teams.

There was no presentation on the day but Carrick Sarsfields facilitated themselves and captain Cian Hughes received the cup to jubilant celebrations with his teammates and their parents.

It was an intense, attacking affair helped by the excellent refereeing from Oisin Hourican who let the game flow. Carrick Sarsfields, playing with a stiff breeze in the first half, got off to a great start.

The 13-a-side football allows for serious freedom for the inside forwards and Carrick Sarsfields duo Brian Mulvey and Shane Burke were causing serious problems for the Wolfe Tones defence.

Carrick Sarsfields exerted a direct ball style of attack with the aid of the breeze. allowing Legan’s Shane Burke to kick the first of his four points early on.

Carrickedmond’s Brian Mulvey then played through his onrushing cousin Conor Mulvey who scored the game’s opening goal. The full back came storming up the field and found the composure to finish the ball to the net.

Brian Mulvey was on hand again with another assist moments later as his superbly executed dummy opened up the space for Shaun McGrath who rocketed a shot to the top corner of the net.

Carrick Sarsfields entered the first water break firmly on top with their two goals separating the sides and kicked on after the restart with further points from Shane Burke and Ross Doherty.

Mostrim’s Ronan Courtney and Jack Belton’s best efforts were being thwarted by a resilient Carrick Sarsfields defence but Courtney’s frees managed to keep his side in touch. The amalgamation led by 7 points at the break on a scoreline of 2-4 to 0-3.

Wolfe Tones Óg now had the advantage of the breeze in the second half and immediately made an attack on closing the gap. Jack Belton powered through from the throw-in to kick over a fine effort. Ronan Courtney then fired over a brace of scores and Orrin Murphy also chipped in with a neat point as the Edgeworthstown side battled back.

The failure to raise a green flag in their purple patch would prove costly for Ray Hussey’s charges who put their towering midfielder Jack Belton into the square but their efforts of hitting a goal were denied by a solid Carrick Sarsfields defence.

Shane Burke notched a further two points for Carrick Sarsfields and Ross Doherty kicked over a fine effort after a high field to return the gap to 7 before the final water break.

In the final quarter, despite playing against the wind, Carrick Sarsfields dominated proceedings. Liam Glennon fired home his side’s third goal and a late hat-trick of points from centre-half-forward Shaun McGrath closed out a convincing win for Damien Doherty’s and Frank McGrath’s slick side.