Longford IFC: Killashee get the better of Ballymahon with little at stake 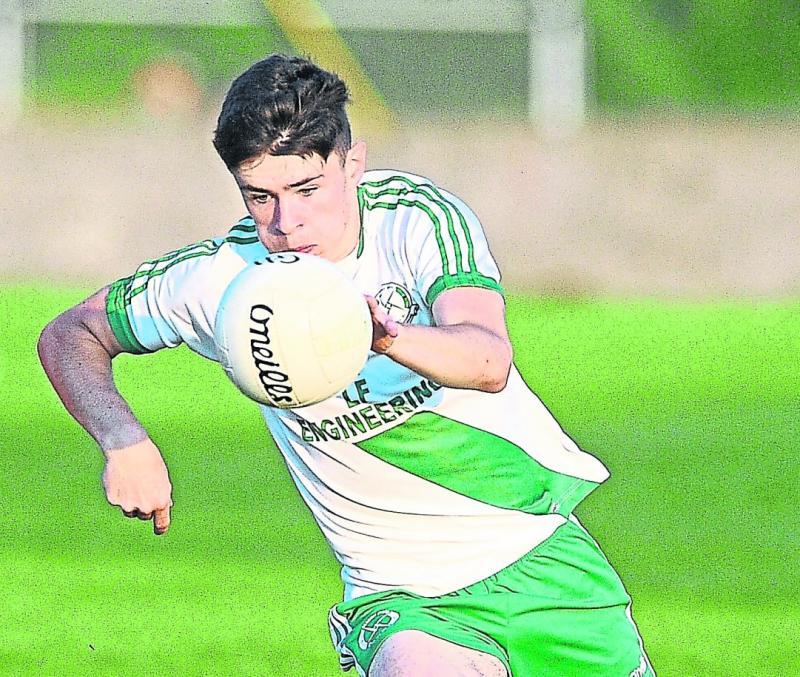 Dylan Farrell, who scored 1-3 for St Brigid's Killashee in their win over Ballymahon in the Intermediate Football Championship third round clash at Moran Park on Sunday last

St Brigid’s Killashee overcame the concession of three first half goals to record a four point win over Ballymahon in their final group game in the Intermediate Football Championship at Moran Park, Carrickedmond on Sunday last.

There was little at stake with both teams already through to the semi-finals and Ballymahon made the better start to lead by four points by the 19th minute.

That was putting it up to Killashee but they showed a lot of character in battling back to lead at the break by two points: 1-9 to 3-1.

St Brigid’s bossed the second half and were unlucky not to add more goals to their tally with Michael Farrell’s effort cleared off the line and Francie Dolan’s shot went just wide in the 42nd minute.

Ballymahon got off to a great start with a well taken goal from Trevor Smullen in the 4th minute with Mark Connor and John Nevin also involved in the slick move.

Killashee replied with an excellent James Willis point along with a free converted by Willie Skelly.

Connor and Skelly traded frees before Smullen got his second goal in the 19th minute. Three minutes later Killashee were awarded a penalty which Dylan Farrell converted for a goal to cut the gap to just one.

Ballymahon’s response was terrific with Smullen playing the ball to Kyle Fitzmaurice who scored a great goal. That was Ballymahon’s last score before the break with Killashee ending the first half well. A pointed free from Willie Skelly was followed by a great point from Jack Magan, who did well throughout the game.

Further points from Chris Dineen and Dylan Farrell (‘45) left the sides all square in the first minute of stoppage time. Dineen added a second score and Willie Skelly was also on target from play to give St Brigid’s a two point lead at the interval.

Kevin Diffley cut Killashee’s advantage to the minimum with a good point in the first minute of the second half but the excellent Chris Dineen replied with a point from a free. Michael Farrell was then unlucky to see his goal attempt cleared off the line in the 35th minute.

Francie Dolan shot just wide in going for a goal before Mark Connor hit over a free in the 44th minute for Ballymahon. One minute later Wayne Higgins received a black card with Dineen hitting over the resulting free.

Ballymahon were now down to 14 players for a ten minute period and Killashee got back on top with Dylan Farrell unlucky not to grab a goal in the 49th minute when his powerful shot hit the crossbar and went over for a point. Farrell followed that up with an excellent point to put four between the sides.

Ballymahon closed the gap with Mark Connor converting  two frees before Johnny Casey surged forward to fire over a point for Killashee in the 54th minute.

Kyle Fitzmaurice got Ballymahon’s final score of the game in the 57th with St Brigid’s substitute Gerard Evans hitting over two fine points to clinch a deserved win for the Killashee side.

Games to be played on weekending Sunday September 6