Longford SFC: Slashers come out on top as Carrickedmond exit the Connolly Cup 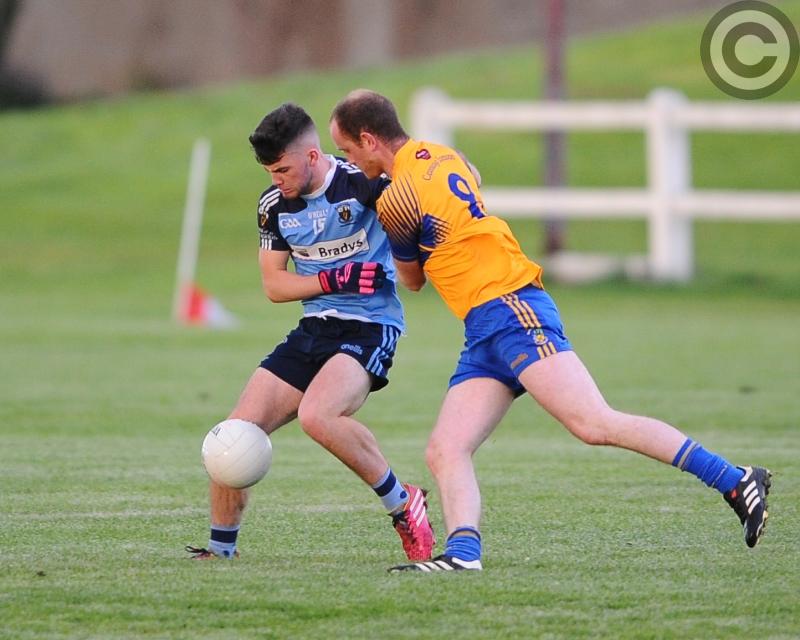 Longford Slashers forward Darragh O'Connell battling for the ball in this tussle with Carrickedmond opponent Enda Farrell. Action from the SFC third round clash on Saturday evening Pic: Declan Gilmore

Longford Slashers are safely through to the last eight in the 2020 Senior Football Championship but there was no joy for Carrickedmond who suffered their second defeat in the group stage and thus exit the Connolly Cup.

This was a must win match for Carrick in the behind closed doors fixture at a deserted Leo Casey Park in Ballymahon on Saturday evening and they trailed by just a point at the break, 0-4 to 0-3.

Slashers were struggling to assert their superiority but struck a killer blow to score the crucial only goal with four minutes gone in the second half.

Stephen Coy’s side were punished for a costly mistake as Ruairi Clarke raced through to plant the ball in the back of the net after receiving the perfect pass from his brother Sean.

Carrickedmond, to their credit, came storming back to fire over three points in a row through Aidan McGuire (free), Rioch Farrell (free) and Eoghan McCormack to close the gap to the minimum of margins, 1-4 to 0-6.

But the south Longford club then squandered a couple of good chances (including a free) and Slashers got back on top with points from Colm Farrell (free), Darragh O’Connell, Conor Clarke and Barry Gilleran clinching a hard earned win.

This result means that last year’s Intermediate champions Fr Manning Gaels are also through to the quarter-finals and Carrickedmond’s tale of woe was complete when Sean Kelly was sent-off after receiving a second yellow card deep into stoppage time.