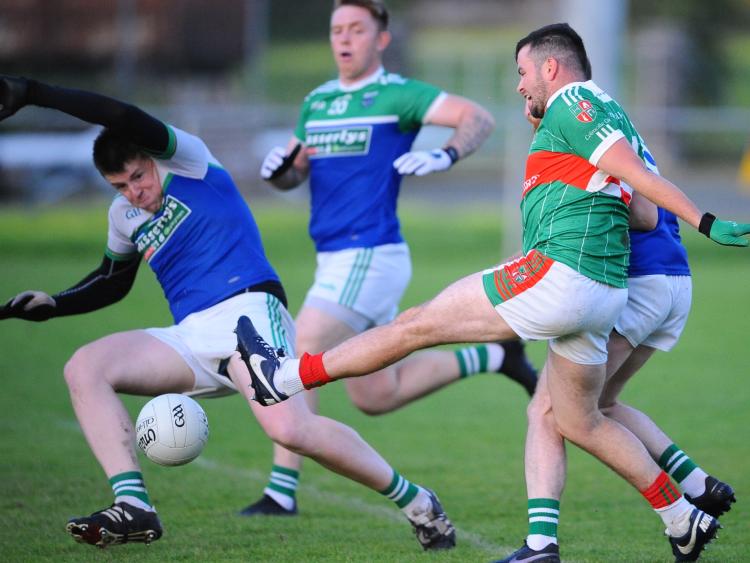 Barry McKeon shooting past Rathcline keeper David Mulvihill to score the first goal for Colmcille in the SFC Group 1 clash at the Monaduff grounds on Friday night Picture: Declan Gilmore

Crucial goals scored by the McKeon brothers Barry and Paul kept Colmcille in control against Rathcline as Eugene McCormack’s side booked their place in the Senior Football Championship quarter-finals.

The remaining fixture in Group 1 was played behind closed doors at the Monaduff grounds in Drumlish on Friday night in compliance with the latest Covid-19 restrictions with Barry McKeon getting the first goal with 11 minutes gone in the first half.

That was the difference between the sides at the break with Colmcille leading by 1-4 to 0-4 and the impressive McKeon fired over three fine points in the early stages of the second half as the North Longford club established a firm grip on the game.

Rathcline, to their credit, showed a lot of spirit in never giving up the fight and closed the gap to just three points courtesy of a few converted frees from Oran Kenny with his brother Shane also on target with a cracking point.

But Colmcille struck the killer blow in the 50th minute when Paul McKeon blasted the ball to the back of the net and they finished up with 13 players on the pitch.

Declan Reilly was sent-off in the 55th minute after receiving a second yellow card while also dismissed was Fergal Sheridan who was branded with a black card in the 60th minute.