Abbeylara or Dromard will crash out of the Longford SFC

All games now behind closed doors 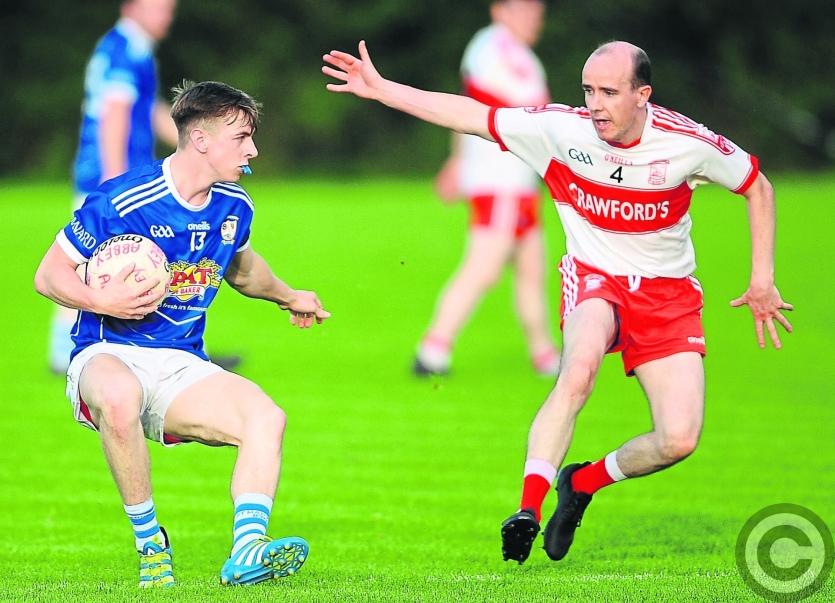 Jordan Martin on the attack for St Mary's in his attempt to find a way past Abbeylara defender Cormac Smyth. Action from the SFC second round game on Saturday evening last Pic: Declan Gilmore

The major news on the pitch last weekend was the wonderful win for St Mary’s over neighbouring rivals Abbeylara, a surprise result which puts the Granard men through to the Senior Football Championship quarter-finals.

The bad news is Covid-19 has struck another blow to sporting events with the latest Government restrictions, reacting to the rapid rise of new confirmed cases, demanding that all games are to be played behind closed doors until midnight on Sunday September 13.

Back to what’s happening on the pitch and the pressure is now firmly on Abbeylara who are facing a must win match against Dromard in the remaining Group 4 fixture at Allen Park, Newtownforbes this Saturday evening, throw-in 7pm.

A draw will suffice for Dromard in their bid to advance a stage further but Abbeylara will be boosted by the return of Connor Berry who was suspended for the game against Granard.

Clonguish are in big danger of crashing out of the Connolly Cup after drawing with Mostrim in Round 2  last weekend and the Edgeworthstown side could still reach the last eight, even if they lose against already qualified Killoe on Sunday evening with the fixture at Lynch Park, Abbeylara to be confirmed.

Scores difference might well decide who goes through but a draw for Mostrim would make absolutely certain of their place in the knock-out stages under the guidance of their vastly experienced manager Dessie Dolan senior.

Full marks to Fr Manning Gaels in producing a true grit performance to conquer Carrickedmond on Friday night last, bouncing back in tremendous fashion from the heavy defeat against Longford Slashers in the opening round.

Carrick now need to beat Slashers at Leo Casey Park, Ballymahon on Saturday evening to keep their championship hopes alive, otherwise the Gaels will progress to the quarter-finals which would be a great achievement for last year’s Intermediate title winners.

Slashers, on the strength of their far superior scores difference, have qualified to be realistic.

Mullinalaghta recovered from the disappointment of letting a commanding slip slip in the draw against Colmcille to score a comprehensive win over Rathcline in Round 2 but only began to assert their superiority in the second half after the sides were all square at the break.

St Columba’s are safely through to the last eight and will be joined by the winners of the Colmcille v Rathcline clash at the Monaduff grounds, Drumlish on Friday night, although a draw will be good enough for Eugene McCormack’s charges to qualify from Group 1.

Through to the Intermediate Championship semi-finals are Ballymahon and Killashee by virtue of their wins over Ballymore and Kenagh respectively on Sunday evening last.

Thus the Round 3 fixtures are meaningless matches but things are a lot tighter in Group 2 and scores difference could decide what two teams make it through to the last four in the Hennessy Cup.

Ardagh Moydow are in pole position after their narrow win over Sean Connolly’s on Sunday last but Cashel can still qualify.

After losing to Connolly’s in the opening round, a win is a must for Cashel in their intriguing clash against Ardagh Moydow at the Clonbonny grounds, Lanesboro on Saturday evening, throw-in 7pm.

Longford GAA are live streaming Senior and Intermediate Championship fixtures on their  new 'An Longfort TV' this weekend.