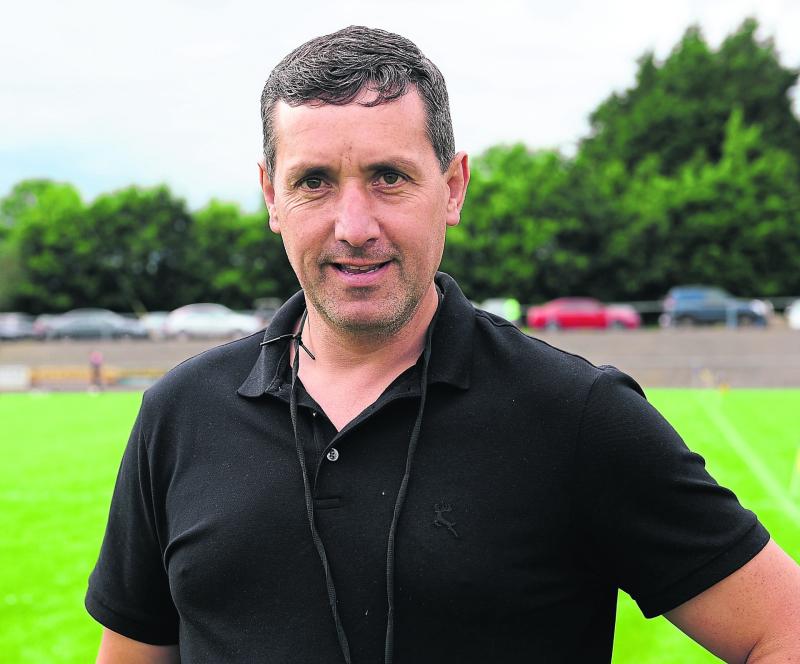 Former Leitrim star Seamus Quinn from Gortletteragh, in his second season as the manager of Sean Connolly's Intermediate football squad

Gregory Masterson’s crucial goal midway through the second half proved to be the difference as Sean Connolly’s edged out Cashel by the minimum of margins in the Intermediate Football Championship first round game at Michael Moran Park, Carrickedmond on Sunday evening last.

Masterson finished to the net after his first strike from the penalty spot was expertly saved by Cashel netminder Conor Skelly. Masterson though was first to the rebound to get the only goal of the game which saw Connolly’s pick up the points in a tight affair.

The Ballinalee men did well to hang on as they were reduced to 14 men late on when Eugene Murtagh was sent-off after receiving a second yellow card. Cashel pushed hard for the equaliser but David Sweeney’s fisted effort just fell short to the net, leaving the shannonsiders with it all to do in their final group fixture against Ardagh Moydow in a couple of weeks.

Sean Connolly’s came into this encounter in good nick with an impressive win over Senior side Fr. Manning Gaels in the league last week under their belt and they started brightly with points from captain Dessie Reynolds and midfielder Stephen Lynch.

Cashel, managed by Killoe clubman Jason Tully this year, responded well with points from Luke Casey and a fine effort from Jamie Bermingham.

Both sides could rely on two very accurate free takers throughout with Conor Farrell’s striking from the ground and Stephen Lynch’s left foot being called upon regularly. The two men exchanged frees before Conor Flood capped his excellent solo run from midfield with a neat point.

The Reynolds brothers were on song then inside for Connolly’s, collaborating to get a score each to send the sides in level at half-time, 6 points apiece.

The ding-dong battle ensued after the restart with Cashel captain Andrew Farrell racing through for a score from the throw-in but this was quickly replied to through a massive free converted by Stephen Lynch.

Back at the helm in Ballinalee is former All-Star full back and Leitrim’s 1994 hero Seamus Quinn and he must have taught young full-back Sean O’Sullivan a few tricks as the minor charged up the field for a great score to level the game for the 7th time.

Cashel stalwart Padraig Farrell put his side ahead for the last time before Connolly’s full forward Joe Heaney superbly fielded a long ball in and win a penalty for his side, duly converted at the second time of asking by the wing-back Masterson.

The powerful Andrew Farrell moved to full-forward and Cashel did manage to bring the game back to a point through scores from him and his brother Conor but couldn’t find the equaliser in a pulsating finish.

This group consists of three very competitive teams all within a fighting chance for the Gerry Hennessy Cup this year.

Sean Connolly’s go on to play Ardagh/Moydow next Sunday in the Laurels at 2pm, knowing a draw would see them through to the semi-final.

Cashel must wait until the final round to face Niall Sheridan’s side where only a win could manage their progression to the last four.