Longford SFC: Pressure is on in the heat of the championship battle 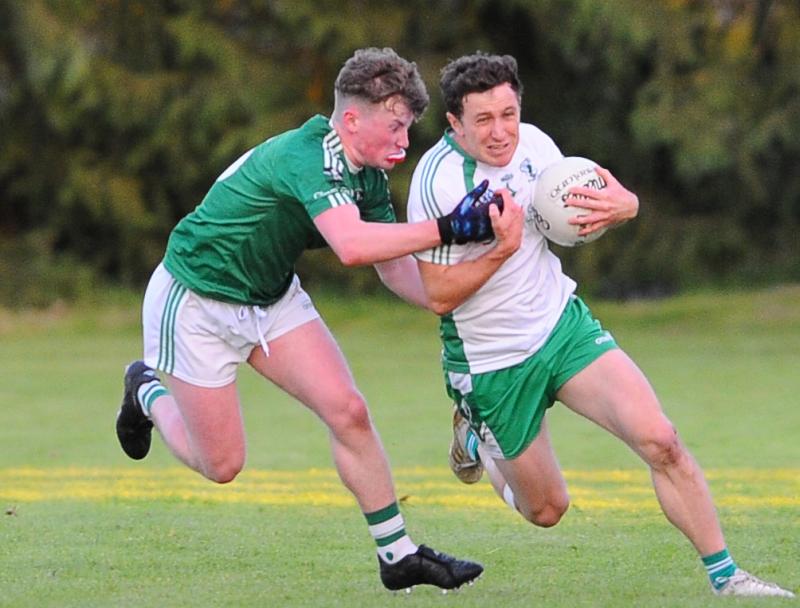 Daniel Mimnagh on the ball for Killoe in this tussle with Clonguish opponent Francis Molloy. Action from the SFC first round game at the Monaduff grounds last Friday night. Pic: D Gilmore

With the exception of a heavy defeat for last year’s Intermediate champions Fr Manning Gaels, the other three first round games in the group stage of the 2020 Connolly Cup proved to be competitive contests.

There was a surprise in store for the title favourites Mullinalaghta who let a commanding eight points lead slip from their grasp as Colmcille produced a brilliant comeback to snatch a draw at the Dromard grounds last Sunday evening.

A wake up call perhaps for St Columba’s but they can make sure of their place in the quarter-finals with a win over Rathcline in the Round 2 clash at Leo Casey Park, Ballymahon on Saturday evening, throw-in 7pm.

On the other hand, should Mullinalaghta ever happen to suffer a shock defeat then they will crash out of the championship!

Whoever wins this local derby will book their place in the last eight and it might all come down to scores difference to determine the second qualifier from a most intriguing group.

Clonguish were never really able to handle a slick and sharp Killoe side at the Monaduff grounds, Drumlish on Friday night last, losing by five points in the finish.

The Newtownforbes outfit are now facing a must win game against Mostrim at McGee Park, Aughnacliffe on Sunday evening, throw-in 6.30pm.

It looks like another struggle for the Drumlish/Ballinamuck side in the Round 2 match against Carrickedmond on Friday night at McGann Park, Kenagh (throw-in 8pm) with a championship exit the probable outcome for the depleted Gaels.

Some of the SFC quarter-final spots will be decided over the weekend while also on the agenda are the Round 2 games in the Longford Intermediate Championship.

Ardagh Moydow will make their first appearance in the 2020 Hennessy Cup when they head to The Laurels, Mullinalaghta on Sunday (2pm) to take on Sean Connolly’s, narrow winners over Cashel last weekend

In the other group, Ballymahon are strongly fancied to beat Ballymore at Flood Park, Legan while there is a lot at stake in the meeting of Kenagh and Killashee at  Clonbonny, Lanesboro. Both games are on Sunday evening,  starting at 6.30pm.

Longford GAA are live streaming three senior games  and one Intermediate fixture on their  new 'An Longfort TV' this weekend.