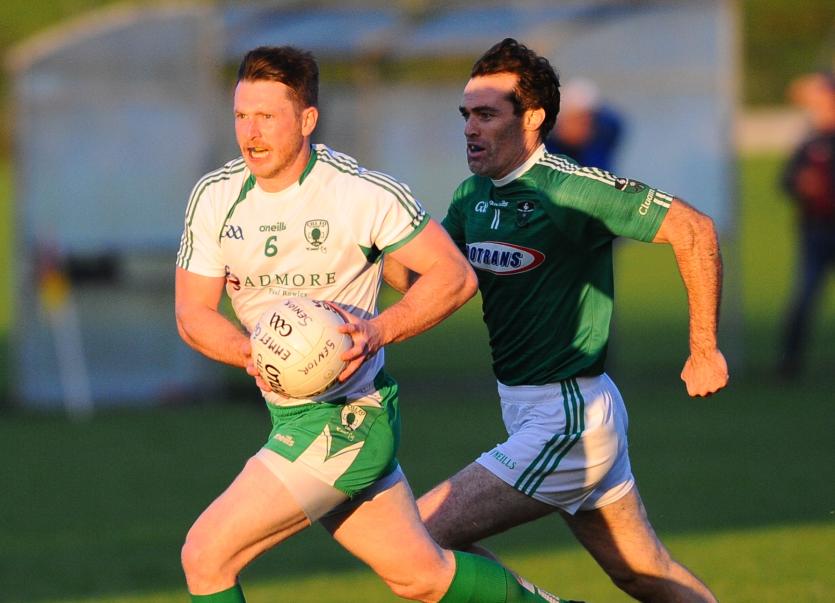 Showing a lot of pace throughout the team and moving well together in a fine blend of youth and experience, the title holders Killoe started the 2020 Senior Football Championship with a comfortable win over Clonguish at the Monaduff grounds on Friday night with the impressive Mark Hughes shooting a total of six points.

Amid the dreaded coronavirus and all the various restrictions in compliance with the current Government guidelines, there was a strange atmosphere in Drumlish with the attendance at games currently capped at 200 and those who were fortunate to get a match ticket will hardly argue with the fact that Emmet Og were never in any real trouble.

Having said that, the county champions had a lucky escape when Jack Duggan cracked a shot against the crossbar in the early stages of the first round clash in Group 2 but Killoe went on to establish a commanding 0-6 to 0-1 lead with 20 minutes gone in the first half.

Clonguish only trailed by three points at the break, 0-7 to 0-4, but Killoe should have been further ahead with their effective playmaker Daniel Mimnagh looking certain to score a goal in the 29th minute but his point-blank shot was stopped on the line by Francis Molloy.

The McCormack brothers Sean and Padraig may be missing this season along with big midfielder Simon Kiernan but the return of Larry Moran after a lengthy injury absence is a major boost for Emmet Og and he looked sharp in firing over three points in the first half.

Despite a fine contribution from young Jack Duggan who kicked five points in the second half, Clonguish were always fighting a losing battle with the slick Killoe side adding another seven scores to their tally on the changeover, three apiece from Mark Hughes and Eamon Keogh.

Clonguish are now facing a must win game against Mostrim in Round 2 next weekend and will certainly have to improve on this disappointing display.