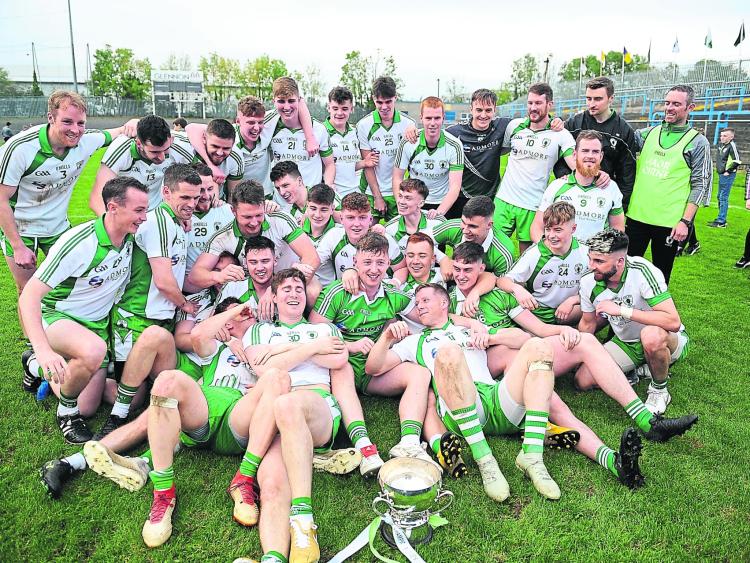 Strange times indeed in the countdown to the start of the 2020 Senior Football Championship this weekend in compliance with all the Covid-19 restrictions but the fierce desire to capture the coveted Connolly Cup is still the same.

The atmosphere may be lacking with the attendance at games currently capped at 200 until further notice. This includes players, team mentors, officials, media, stewards and others, meaning that there will be around 100 tickets for supporters.

A tainted championship perhaps but that will matter little to the club who are eventually crowned the kings of the county at the end of September and all the joy and pride that it brings to the parish.

With Granard and Rathcline given a reprieve after suffering the disappointment of relegation from the top flight last season, 12 clubs will compete in the race for the Longford SFC title this year with Mullinalaghta in pole position.

The signing of former Cavan star attacker Cian Mackey from Castlerahan is a major boost for St Columba’s in their determined bid to make amends for the shattering blow of a shock defeat against Colmcille at the quarter-final stage last year when they were denied a record equalling four-in-a-row.

And with former Longford forward JJ Matthews back home after spending a few years in the United States, the Mullinalaghta attack looks ultra strong this season with the opposing defences also having to deal with the major threat of Rian Brady, Jayson Matthews and the McGivney brothers James and David.

St Columba’s have quality players throughout their very well-balanced team and first up for the 2018 Leinster Club champions is a rematch against neighbouring rivals Colmcille in the opening round of the group stage this Sunday evening.

That intriguing local derby would normally attract a big attendance but that will not materialise on this occasion as the country continues to deal with the presence of the dreaded coronavirus.

At one stage it looked like gaelic games this year was facing a complete wipe out but thankfully sport is back on track and it is a great lift for all concerned to be back on the pitch.

Colmcille, a generally young team with plenty of potential, will go into the game against Mullinalaghta in the hope of causing another upset and even if they happen to lose they will get another chance of making it through to the quarter-finals.

Rathcline are the other team in the Group 1 and while they are considered to be the outsiders, a number of promising young players have emerged in some sort of a resurgence which suggests a bright future for the Lanesboro outfit.

Group 2 looks the most competitive and the reigning champions Killoe cannot take anything for granted in the games against Clonguish and Mostrim.

The absence of the McCormack brothers Sean and Padraig is absolutely a big blow for Emmet Og who start the defence of the Connolly Cup against Clonguish this Friday night.

A number of talented players are coming through the solid underage structure in both clubs with a good mix of experience and Killoe will be depending on their county men Michael Quinn and Daniel Mimnagh to get them through this tricky task.

Clonguish were bitterly disappointed to lose against Slashers in the quarter-final last year when they had high hopes of reaching the county final through the supposedly easier side of the draw and they will be quietly confident of an extended run in the current campaign with John Rogers back at the helm.

Although Mostrim have a tendency for inconsistent performances, steady progress has been made in recent years and they are always capable of springing a surprise. New manager Dessie Dolan senior is certainly no stranger to Longford club football and the shrewd coach will be hoping to get the best of the Edgeworthstown players.

Longford Slashers will be bidding to build on their fine achievement in reaching the county final last year with a lot of vibrant youth on their team plus the vast experience of such stalwarts as Dermot Brady and Barry Gilleran.

Noel O’Brien is back for a second season as manager and while the draw for the group stage would appear to be kind there is nothing guaranteed in the games against Fr Manning Gaels and Carrickedmond.

Slashers are in action against the Gaels in the opening round this Saturday evening and the Drumlish/Ballinamuck side are the underdogs in making a significant step up from winning the Intermediate Championship title last year.

With a new manager in Stephen ‘Busty’ Coy, the goalkeeper on the Killoe team that won the senior championship title in 2014, Carrickedmond feature a few talented young players and will be fancied to reach the last eight for the second year in succession.

Granard are putting their faith in the progression of youth in a rebuilding process and could put it up to Dromard and Abbeylara in Group 4, particularly with Darren Gallagher back on board after missing the group stage of the championship last year.

Another of St Mary’s key players, Liam Sullivan, has recovered from a cruciate injury and he will be facing his first cousin Robbie Smyth with the Abbeylara ace returning to the county squad in a piece of positive news.

Granard will target a possible win against Dromard (under new manager Padraig Brady from Mullahoran) this weekend in their quest to qualify for the quarter-finals but that is going to be a difficult task against a very experienced championship team who are always hard beaten.

The same must be said about Abbeylara, the beaten finalists in 2015, 2016, 2017 and 2018 and who lost to Slashers by a single point at the penultimate stage last year.

What appears to be a competitive championship this season could well develop into a St Columba’s domination, such is their serious strength.

Thus it is hard to look beyond the might of Mullinalaghta who will be highly charged in their drive to regain the Connolly Cup that unexpectedly slipped from their grasp in 2019.

As to what teams will miss out on a place in the 2020 SFC quarter-finals the prediction is  that Rathcline, Mostrim, Fr Manning Gaels and Granard will fail to progress from the group stage but at least the pressure of relegation has been removed this year.

Who will reach the 2020 Longford SFC quarter-finals?

The top 2 teams from each Group (Rule 6.21 to determine placings in the event of teams finishing equal on points at the conclusion of the round stages) will progress to the quarter-finals (which will be decided on the day - no replays), and the pairings will be decided by open draw.

There will be no replayed semi-finals either, however, in the event of the final finishing in a draw there will be a replay.

There is no relegation from this year’s senior football championship